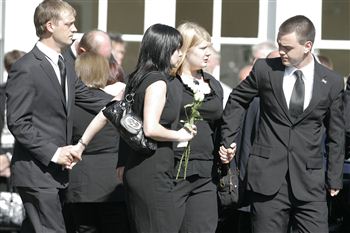 HUNDREDS of mourners paid tribute to tragic teenager Daniel Steedman as he was laid to rest a week after drowning in a flooded quarry (Friday).

The 15-year-old lost his life while swimming with friends at the Humbie Quarry, Kirkliston, West Lothian.

So many grieving friends and relatives attended that many had to listen to the service through a PA system from outside Warriston Crematorium’s Lorimer chapel in the breezy summer sunshine.

Many of Daniel’s school friends from Queensferry High School embraced each other as the small coffin was carried into the packed chapel.Minister Maggie Lane paid touching memorial to Daniel.

She said: “Daniel was a loveable rogue; he was good natured and always had a joke at the ready. He touched everyone he met and people took him to their hearts – that’s what loveable rogues do.

“He loved the camping and the outdoors, he loved playing golf and was very proud of his hair – he always spent hours on it.

“He was nice natured – fun of fun. He never held a grudge and he took a telling when it was needed.

“And he had that competitive spirit that drove him in whatever he did.

“His Boys Brigade officer described him as a ‘very pleasant, polite young man, who always had a cheery smile and a hello for everyone’.

“And he had a great smile and a cheeky face and he was a great friend.”

The Rangers-mad teen was a also keen football player and played for Edinburgh City, Uphall Diamonds and Broxburn court.

And the keen army cadet, who was based at Broxburn, was considering joining the army and navy after school. 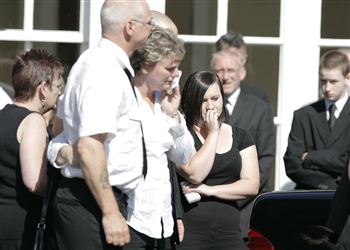 His dad Chris, step-dad Tam and mother Mary were joined by Daniel’s brothers Alan and Steven and sisters Margaret and Lisa.

Ms Lane also thanked the emergency services who searched vigilantly for Daniel for five hours until they pulled his body from the murky water last Friday.

One of the touching tributes left on Daniel’s Bebo page said: “Rest in peace sweetheart, there’s a big hole in our hearts now – you’ll never be forgotten.

“We will miss you so much it’s hard to describe.”

Minister Ms Lane added: “Because Daniel Steedman lived, there is more love in the world than before. Because Daniel lived many of us have learned to treasure life a little more, our own and that of others – he will never be forgotten.”

The family asked mourners to leave donations to Macmillan Cancer Research, after one of Daniel’s friends died of the disease.

At the funeral, the Church of Scotland Minister read out this poem:

He is Gone by David Harkins

“You can shed tears that he is gone,

or you can smile because he has lived.

You can close your eyes and pray that he’ll come back,

or you can open your eyes and see all he’s left.

Your heart can be empty because you can’t see him,

or you can be full of the love you shared.

You can turn your back on tomorrow and live yesterday,

or you can be happy for tomorrow because of yesterday.

You can remember her only that he is gone,

or you can cherish her memory and let it live on.

You can cry and close your mind,

be empty and turn your back.

Or you can do what he’d want:

smile, open your eyes, love and go on.”