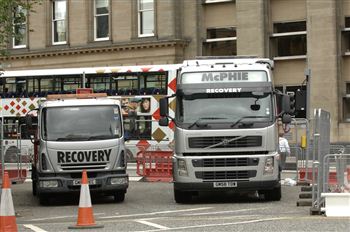 ROAD bosses have splashed out a whopping £250,000 to keep two tow trucks on stand-by during roadworks.

The two vehicles have sat fenced off on a roadside at a cost of £5,830 per-week since February throughout Edinburgh’s tram project development.

Tram chiefs TIE claimed the recovery vehicles have been used “many many times,” and the capital’s council defended their deployment as a “prudent measure.”

But critics asked them to justify the cost, saying the public would bring them under “extreme scrutiny.”

Bosses say decided to employ the trucks in response to widespread criticism after a disastrous road closure on The Mound last year brought gridlock to the city.

They plan to keep the trucks on-call while tram tracks are laid along Princes Street until the final phase is completed in January.

But councillor Steve Cardownie said he will write to tram bosses to make sure they can justify the expense.

He said: “It’s a lot of money, but it would be disastrous if George Street was to get clogged up with traffic – that could bring the whole city to a standstill.

“I hope TIE are getting value for money.

“I will be writing to them to see if they have done everything they can to make sure they are getting best value.

“They must consider the fact that the public are now bringing this sort of project under extreme scrutiny, and I would hope that TIE would be able to justify this sort of expense.”

Lorna McPhie, a partner at George McPhie and Son – who own the trucks – said the vehicles had been used to keep traffic moving on a number of occasions since February.

She said: “They’re there to tow away anything that breaks down – buses, vans, cars and taxis.

“It’s about keeping congestion to a minimum and we’ve got reams and reams of paperwork to show they are being used. They have been used many, many times.”

“We are committed to keeping Edinburgh’s traffic flowing during the construction of Edinburgh’s trams and this recovery provision is a necessary tool in achieving this.

“The cost of a breakdown snarling up Edinburgh’s traffic far outweighs the cost of these prudent measures.”

He said: “This is a huge bill, and you’ve got to ask if it represents good value for money.

“At these kind of prices it may have been cheaper to buy a lorry to do the job.

“In the middle of a recession, the council should certainly have driven a harder bargain with the contractors.”