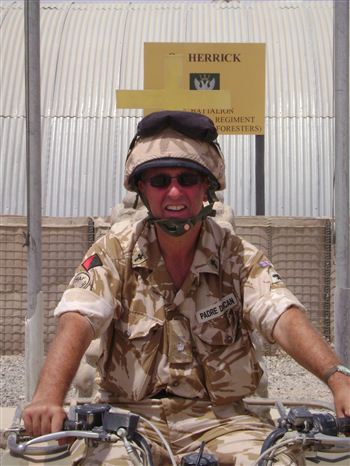 A MILITARY chaplain from Scotland is becoming a hero in Afghanistan for tearing across the desert – in a vehicle called ‘The God Quad’.

Padre John Duncan supports troops in several bases in Helmand province, which has seen some of the heaviest fighting between British forces and Taleban fighters.

But the 53-year-old speed freak says he loves his job because the bike helps to keep him cool in the scorching desert – with air conditioning “provided by the lord”.

He said: “I was encouraged to do the quad bike course at McGilligan Camp before I was deployed. I was a bit of a ‘Miss Daisy’ so it didn’t come easy to me.“To say I passed with flying colours would be a gross overstatement – though nothing serious enough to prevent me from being the ‘God Quad Bike Rider’.”

John is padre to The 2nd Battalion, The Mercian Regiment, based in Camp Shorabak, but he frequently has to travel between Shorabak and Camp Bastion – British troops’ HQ.

At first the routes between camps were too dangerous to use but as American Forces moved in it allowed John to hit the open road.

“Initially, I could not use a quad bike at all. But when the US Marines arrived, they opened the ‘friendship gate’ of US Marine Camp Leatherneck – which means I can travel between Camp Shorabak and Bastion on my trusty quad.”

“The lads have had a tough tour, with many of them seeing heavy fighting on Operation Panther’s Claw.

“My job is to be there for them; to support and guide them whenever they need me. The quad bike gives me the flexibility to keep in touch with as many of them as possible.”

Before becoming a minister John worked for shipbrokers Barrie & Nairn but was also heavily involved with Menzieshill Parish Church in Dundee.

He then left his job to study theology at Aberdeen University and later Trinity College Dublin before becoming a minister.

John has been a military chaplain since 2001 and has served in Germany, Kosovo, Iraq, Cyprus, Jordon, Falklands, Canada, Northern Ireland, and Afghanistan – but this is the first time he’s been let loose on the open roads in a major conflict zone.

He added: “You come off the God Quad as a Clint Eastwood ‘Pale Rider’ lookalike. The other day I arrived to meet one of my fellow padres and as I sat down on his sofa I left a sand-shaped outline of myself imprinted on it.

“But it’s quite a pleasant way to move around, because I have the wind as my air conditioning – which the Lord provides!”