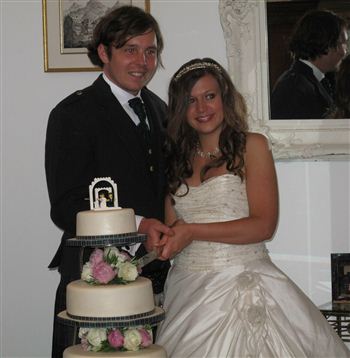 A NEWLY-MARRIED Scots couple has been left devastated after their wedding video went missing while on their honeymoon.

Karen and Chris Howden, from Inverness, were heading off to Tanzania for their dream break when they discovered the camera containing ten hours of their special weekend had disappeared.

It included special recorded messages from most of their 150 guests.

The £500 camera was a wedding present from Karen’s parents, Sandra and Alan Sutherland, and is presumed to have been lost as the couple travelled to Gatwick from Inverness on Sunday afternoon.

Distraught Karen, 24, has been ringing home every day from Africa asking if the camera has been handed in.

The couple’s big day was held at Achnagairn House, Kirkhill, near Inverness in front of 150 invited guests, and mum Sandra revealed almost everyone attending had filmed a special secret message to new bride and groom.

Now the Sutherland’s have putting up a cash reward for the person who finds the treasured video.

Mrs Sutherland, 49, said: “We are all so upset about the footage going missing. It’s not the camera we are bothered about but the memory stick has over ten hours of recording on it, which to us is priceless.

“The whole weekend was filmed including a family barbecue we had the night before, Karen and the bride’s maids getting ready for the wedding and the actual service itself.

“We also arranged for all the guests to record a little message for the two of them as a wee surprise.

“Karen has called us everyday, but we still haven’t had any luck tracking it down.”

Karen, a Spanish teacher, and Chris, a primary school teacher, were so excited about watching their wedding video they began viewing it on the flight down to Gatwick.

The couple then took a bus to a hotel near Heathrow Airport where they were flying out to the Serengeti National Park in Tanzania the following day.

It is thought the camera went missing either on the flight to London or the bus journey to Heathrow.

Mrs Sutherland said: “Karen is really upset and is blaming herself. She thinks they left it on the plane down but it might have been on the bus to Heathrow because that is where they discovered it was missing.

The new Mr and Mrs Howden will start their married life in Cornwall when they return from Africa.

Flight operator easyJet and both Gatwick and Heathrow lost property departments have said there has been no sign of the camera and no-one has handed it in.

Mrs Sutherland added: “We think the flight went to Prague after Gatwick and our only hope is that somebody has found the camera.

“It’s a long shot, but we are quite willing to offer a cash reward for the safe return of the footage.”

The missing camera is a digital JVC and was held in a Sony case when it disappeared.