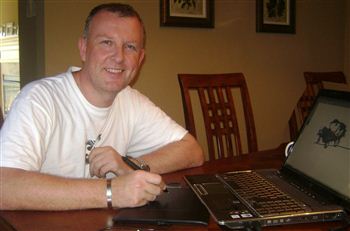 AN America-based Scots boffin is taking on some of the world’s best cartoonists in a bid to claim back his title of “Science Idol.”

History professor James MacLeod, 43, is hoping his tongue-in-cheek approach to climate change will land him the coveted prize of science’s most socially conscious, and not to mention wittiest, doodler.

The Greenock-born dad of two now lives in Indiana where he teaches at the University of Evansville.

He admits he’s always been a satirical scribbler ever since his own school days in Glasgow, doodling on every book he had.

But having landed the Union of Concerned Scientists’ award in 2006, the Scot declares he “has a job to do” in poking fun at America’s policy makers for fiddling with science.

He said: “I’m horrified by the extent to which highly conservative Christianity influences society here.

“But I’m willing to stick it here and fight back – I’m not thinking of fleeing back to Scotland.

“I love doing it, but I absolutely feel that i have a job to do.

“If one of my cartoons makes even one person look at these issues more seriously, all the late nights will have been worth it.” 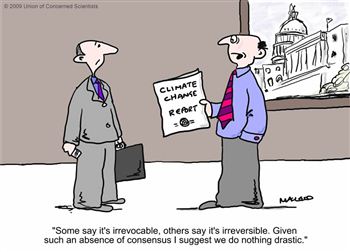 One says to the other: “Some say it’s irrevocable, others say it’s irreversible. Given such an absence of consensus I suggest we do nothing drastic.”

MacLeod hopes that being a Scot will give him the edge in the contest, as he can stand back at look at America’s biggest issues with a pinch of salt.

But having lived in the States for over 10 years, he admits he’s “immersed” in the country’s politics.

He even once met President Barack Obama while on the campaign trail last year, and would love to become the White House’s official cartoonist.

He added: “I feel pretty immersed in the political culture here now, more so than Scotland in some ways.

“I’ve been here and closely following politics on a daily basis for a decade.

“Being foreign might give you some distance, but to be honest these science issues are universal.

“I campaigned actively for Obama and I even met him briefly while campaigning right up to closing time on Election Day.

“But I doubt such a sophisticated and slick campaign would want a Scottish professor blogger cartoonist working for them.”

But MacLeod’s winning cartoon caused a stir in 2006 and this year he’s the red hot favourite and has even featured on the ABC TV news network.

He has even had advice from the New Yorker magazine’s cartoon editor Bob Mankoff.

And the Scottish Parliament could be the next victim of MacLeod’s pen.

He added: “I still follow Scottish politics closely and read the papers online every day.

“Politicians are the same the world over, I swear.”

His nominated cartoon can be viewed by clicking THIS link. Voting ends on August 12, 2009.