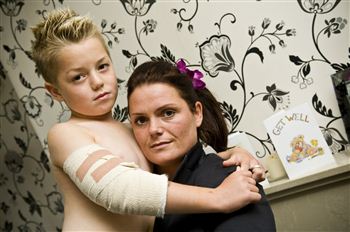 A DOG “like Jaws” mauled a Scots primary school boy, leaving him with blood spurting from his arm.

Eight year-old Logan Urquhart will start his school term with a dramatic tale to tell his classmates – and the scars to prove it.

He was out walking his dog with his sister Sommer, 11, and mum Laura, 31, when a bull mastiff chased the family into a shop.

Now his mum is calling for the dog to be destroyed, while police have vowed to track down its owner.

Logan was left with a five-inch-long gash on his arm after the attack outside shops in the captial’s Inch area.

Ms Urquhart, 31, said: “We were standing outside and we saw this big white bull mastiff. It was huge.

“The girl who was with it said it would be all right, but I said, “Well, get him on a leash”.

“It went for our dog Jazz first, then just jumped up and grabbed me.

“I picked up my dog, my kids were standing there screaming, and the dog tried to maul me.

“I tried to drag my dog and the kids into the bookies but she couldn’t keep control of the dog and it mauled my son on the pavement. I turned round and started screaming.

“There was a big chunk missing from his arm and a few other bites. It’s lucky it wasn’t his face.

“I was trying to get the kids into the car and there was blood spurting everywhere.” 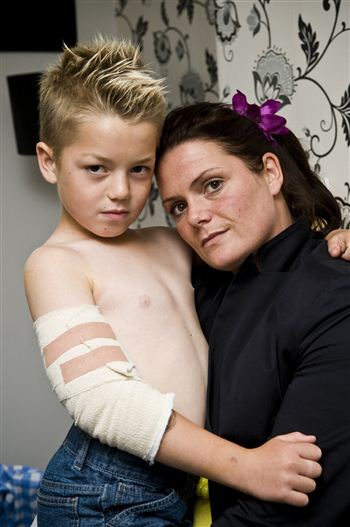 Logan’s grandmother, Helen McKinlay, who was in a nearby shop, said her grandson was luck to be alive.

She said: “I heard Sommer and Logan scream, and when I went out I couldn’t believe my eyes. I just saw my grandson being dragged along the road by the arm.

“That dog could have killed my grandson.”

Ms Urquhart drove straight to the Edinburgh Royal Infirmary, where Logan was given painkillers and transferred to the Royal Hospital for Sick Children in Marchmont.

Medics raced to stem the bleeding by putting Logan under a general anaesthetic and patching him up with 24 stitches.

His full-time mum added: “They had to put him to sleep to clean it because the wound was that deep, and there were six puncture wounds as well.

“The biggest wound’s got about 15 stitches to hold it together.

“They said he’s lucky he’s still got an arm, because if the dog didn’t get off he would have lost it.

“Dogs like that should be on a leash or muzzled. It was the most horrible thing I’ve ever seen in my life.

“When it opened its mouth it was like Jaws. That dog must be destroyed.”

He said: “Police are investigating after an eight-year-old boy was bitten by a bull mastiff dog.

“Inquiries are now ongoing to speak to the owner of the dog and establish the circumstances surrounding the incident.”