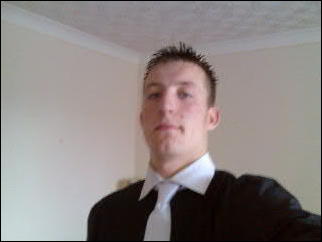 THE COUSIN of former Rangers star Charlie Adam has was among the victims of a horrific car crash, it emerged yesterday.

Donald Adam, 22, lost his fight for life at the weekend – 12 days after suffering severe head injuries as a passenger when a pal’s Honda Civic spun off the A92 near Montrose.

His mother Debbie – footballer Charlie’s aunt – said her son had “a heart of gold.”

Charlie Adam, 23, – who moved from Ibrox to English Championship side Blackpool in a £500,000 move last week – is expected to be at Donald’s funeral next Monday, along with younger brother, Grant, 18, who plays in goal for Rangers reserves.

The footballing pair were at their cousin’s bedside to say an emotional goodbye as Donald lay in a coma, hooked up to a life-support machine.

The former squaddie and mechanic bravely fought for his life for 12 days after the smash on July 27.

But his mother Debbie took the agonising decision of turning her son’s life support off shortly after midnight on Saturday morning, and after a brave 10 minutes he passed away.

Later on Saturday Charlie put on a brave face to make his league debut for his new English club.

Debbie said: “Donald was a fantastic laddie who always had a cheeky smile on his face and, no matter how down you were feeling, he always had something to bring you right back up again.

“He had a heart of gold and would do anything for anyone – it wasn’t unusual for him to get a call in the early hours of the morning and to get out of his bed to go and pick up pals who were stranded.

“For the final four or five days before we took the decision to switch off Donald’s life support, I stopped his pals going in to see him but gave Lisa the option of visiting, which she took.”

And she spoke of how Donald’s two talented footballing cousins also visited Ninewells Hospital in Dundee to give their support.

Debbie said: “My mother was able to get over from South Africa and Donald’s cousins Charlie and Grant Adam – who play football for Blackpool and Rangers – were able to come and sit with him.

“We will be eternally grateful because we had the chance to say goodbye.

“Donald’s injuries were so severe that the doctors kept him very deeply sedated and he never recovered consciousness, although he was able to breath without assistance for about 20 minutes on the first day.

“Even if he had, by some miracle, pulled through, the prognosis was not good.

“The doctors said the physical and brain damage were so bad that the Donald everyone knew would have been gone.

“I believe that you go when your time has come and the family wants to remember and celebrate how much Donald packed into his all-too-short life.”

Donald had been working as a mechanic at Kerr’s of Arbroath for six months before the accident.

His death is the second tragedy to affect the family – Donald’s younger brother Liam, six, died of a brain haemorrhage while on a family day out in Arbroath in January 2005.

Debbie told of how Donald quit the Army shortly after joining to help support his grieving mother.

She said: “His big brother Paul is a lieutenant in The Royal Artillery and Donald joined the army as well but came out after just a week to be with me and the family after Liam died; he was just completely selfless when it came to family and friends.

“He felt the loss of his brother Liam very much and, every Sunday without fail, he would make the time to go to Liam’s grave and lay fresh yellow roses.

She also paid tribute to his friend Lee Smart who was also seriously injured while behind the wheel in the accident.

Lee managed to crawl out of the vehicle and up an embankment from where he telephoned friends who called the emergency services before coming out to the scene themselves.

He lay at the roadside to direct emergency services to help Donald, who was still trapped in the car.

She said: “Lee and Donald were more like brothers. I cannot thank Lee enough.

“We do not blame Lee. We’ve got nothing but admiration and gratitude for Lee.

“I don’t know how he got the strength to crawl out the car and up the embankment.

“But it gave me the time to say goodbye to my son. Me and his brothers will be eternally grateful.”