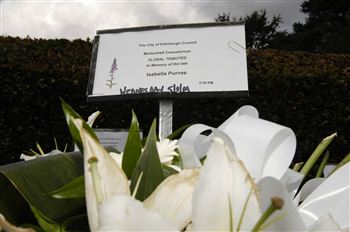 A PENSIONER who lay dead in her flat for five years before anyone noticed has finally been laid to rest.

The badly decomposed body of tragic Isabella Purves was found at her home in Edinburgh’s Canonmills area on July 2.

She was only discovered when a downstairs neighbour noticed water dripping through from Miss Purves’ flat above.

Police officers were forced to break down her front door in a stairwell in Rodney Street and push their way through years of unopened mail before making the gruesome discovery.

It was thought Isabella, who would have turned 90 this year, was last seen in 2004.

Nobody missed the OAP because her pension was paid directly into her bank account and all her bills were paid by direct debit.

Police looking for relatives of the dead woman eventually tracked down an unnamed elderly man from Edinburgh who is said to be Miss Purves’ second cousin.

That finally led to a private funeral service taking place exactly a week ago today – Wednesday – at Mortonhall Crematorium in Edinburgh.

A veil of silence was drawn over the event, with staff sworn to secrecy on the instructions of legal representatives acting for her elusive family.

The only clue to it even happening was a still fresh bouquet of flowers lying all but unnoticed on the carefully tended lawn in the garden of Remembrance.

Solicitors A and W.M. Urquhart acting on behalf of her last remaining relatives refused to release any information on the private service in the run up to the event.

Even the undertakers at H.W. Harkess were sworn to secrecy, with one admitting: “We’ve been told not to give out any details of Miss Purves’s funeral arrangements. We are acting on strict instructions from the family’s solicitor.”

One person who did hold the pensioner in great affection and who may even have been the last to see here alive, now says he was denied a chance to say his own final farewell.

Andrew Haston spent three weeks contacting Lothian and Borders Police, solicitors, City of Edinburgh Council and even the crematorium itself anxiously pleading for the news when his old neighbour would eventually be laid to rest.

Instead he feels he has let her down one last time by being unable to attend her funeral service.

Mr Haston, 50, said: “At first I thought the council were organising the funeral because there were no living relatives.

“But then I found out the police had tracked down an elderly relative and I thought it would be relatively easy to arrange to go along to pay my respects.

“But, I’ve been led up the garden path by all of those concerned. I contacted the police, the solicitors, the funeral directors and the crematorium several times but no-one was willing to give me the time of day. I can’t really see the need for such privacy.

“To be honest, their attitude is a bit pathetic.

“I called the solicitor and left four messages to call me back, but never received a call back. I could understand it if the family wanted the funeral to be totally private, but a telephone call informing me of that decision would have been nice.

“I’ve just been going round in circles.”

He added: “All I wanted to do was to say my goodbyes to someone I liked very much.”

A spokesman from Age Concern and Help the Aged Scotland said that it was a “tragic case” but one that wasn’t unusual.

The charity said that funeral arrangements were up to the individual’s family.

He said: “If Isabella was not receiving care treatment from anyone and not receiving social care, then the likelihood of being found quickly is minimal.

“The question is not just about public services finding people and neighbours checking up, it’s about how elderly people themselves are living their lives. If they’re leading private lives, then how are people going to find them?

“Society has fractured. We’re not in the same units as we used to be. People might not phone their own gran more than once a month.

“If we took an expert in care and we put them in say a GP’s surgery or local library, it would bring them closer to the community.

“It would be a very good first step forward to see if we can find these people who are very isolated.”