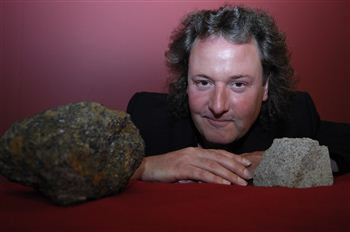 THE Indiana Jones of the meteorology world is to sell the artefacts he fought tooth and nail against other hunters for in a landmark auction next week.

Robert Elliott, 48, has had guns pulled on him, traversed the most dangerous regions in the world and been bitten by lethal tarantulas – all in his quest to find space rock.

But the former Ministry of Defence Trident engineer’s efforts have paid off – his collection is valued at over £500,000 and includes a lump of Mars rock.

Other artefacts include a two-foot titanium docking sphere from a Cold War Russian space station that crashed through the roof of a house in Argentina and the famous Park Forest meteorite that peppered houses in Chicago with a shotgun-like blast in 2003.Robert, 48, says collecting meteorites is one of the most exciting hobbies in the galaxy.

He said: “If I heard a meteorite had landed in America I would jump on a plane with a bag-load of cash and try and get there before other the other guys.

“More often than not you don’t get it – but the end result when you do is worth it.

“Yeah it’s been dangerous – I’ve been bitten by flesh eating spiders and all sorts, spiked myself on cactuses and got into general scrapes.

“I was once in the Arizona desert checking out a place where a meteorite had fallen in the early 1900s.

“It happened to be on a Navajo Indian reserve and a lot of people used to hunt for bits of old Indian pottery, so they’d stopped people from going there.

“Word got out that there was this British guy out in the desert up to no good and the next thing I knew there was this Sheriff coming towards me in his car.

“I was walking towards him with my big golf stick – so he pulled his gun on me.

“It was all quickly resolved and luckily he let me go.

But Robert admits it isn’t all plane chases and exotic locations.

The star piece in the collection is the Hambleton meteorite from North Yorkshire worth up to £90,000 – which Robert found with a home-made metal detector made of a magnet tied to a golf club.

“I take a golf club, cut the end off, and stick a magnet on the end and jab at anything on the ground that looks like a possibility.

“That’s how I found the Hambleton myself in 2005. It was a heavy rusty chunk from out of space – but it had been sitting in the wet soil for 200 years.

“Inside it had semi-precious gemstones and it’s the rarest ever found in the UK.

“It’s one of only one per cent of all meteorites – and the scientist at the Open University are still working on it – but they think they’ve found a new mineral never seen before.”

The collection also includes rocks from two different parts of the Moon, a piece of the Vesta asteroid and a piece of Mars rock.

The collection also includes one of the oldest meteorites known on Earth, the Lake Murray, which was found in rock over 110-million-years-old.

Robert explains how he ended up as a meteorite hunter.

He said: “I’ve always loved science, even as a small kid. My mum and dad bought me an electronics kit for Christmas and I was always little gadgets and transmitters and I just love electronics.

“And of course Apollo IX was landing on the Moon at the time and that sparked a lot of people’s interest.

“I didn’t get my first genuine meteorite until 13 or 14 years ago. I bought a little piece from an advert in the back of a science magazine for $40 when I was working in the States.

“I didn’t really expect it to turn up in the post but it turned up two weeks later and I was over the Moon.

“I kept picking it up and looking at it.

“I also learned to check if artefacts are genuine myself by slicing one open and doing an acid test.

“I always had an interest in comets and meteorites – but that first $40 rock started it all off.

“It was 1997 when I went professional as a meteorite dealer. I always keep a piece of the each for myself and then sold on the rest.

“What I swapped with the museums brought me a lot of money – and that’s how the business started.

“Now I have 171 lots of meteorites from all over the world.

“Some of them date back centuries – and each one has a story.

“I’m to retire as a dealer and hunter but carry on finding meteorites for research.

“If one person came along and made an offer for the collection it would be in excess over £500,000.

“If there is anyone out there – let’s talk.”