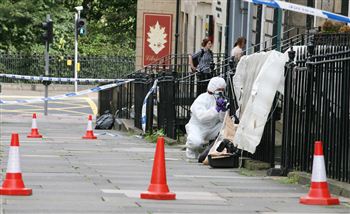 A PLUSH Edinburgh townhouse where the body of a man was found last week is to receive the go-ahead for renovation.

Three floors of the five-storey building at 57 North Castle Street – including the basement where the body was found – are to be modified into two separate luxury apartments.

It comes just one week after the body of Mark Hunter, 27, was found at the exclusive New Town address last week.

A passing member of the public made the grisly discovery at 7am last Tuesday which sparked a police investigation.

Mr Hunter’s body was found face down at “an awkward angle” in a basement garden 12 feet below ground level.

It was thought he may have fallen into the basement after having an epileptic fit.

Detectives have trawled through hundreds of hours of CCTV footage to determine the route that Mr Hunter took the night before he died.

Mr Hunter was last seen in a pub three miles away in Northfield last Monday.

The scene of the incident is around the corner from the Oxford Bar, the famous drinking haunt of Ian Rankin’s Detective Inspector Rebus.

A spokesman for the planning department confirmed that permission had been granted for the building.