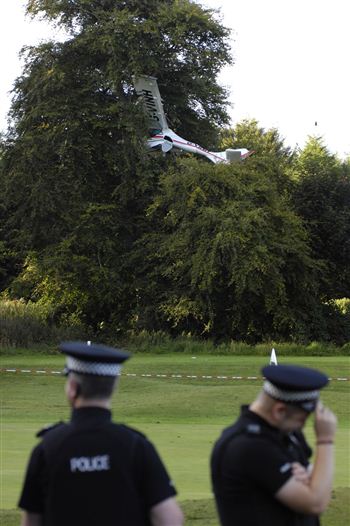 BREAKING NEWS: A MAJOR rescue operation was launched this evening to save a pilot after his light aircraft nose-dived into a tree between the 14th and 15th holes of a golf-course in Dundee.

Police, fire and ambulance teams have been scrambled to Caird Park Golf Club – just two miles from the city centre – after the alert was raised just before 5pm.

A man – understood to be the pilot and only occupant – was said to be trapped 20ft above the ground in the aircraft having suffered what were described as “head wounds”.

Medics at the scene have said the man was still conscious and able to talk to those on the ground as they attempted to free him around an hour later.

A spokeswoman for Tayside Police said: “All emergency services in Dundee are currently in attendance.

“The plane is currently lodged in the tree, with the pilot still on-board. He has a head wound but is talking with emergency services personnel.”

Rescuers have been using ladders to try and reach the man after his micro-light craft lodged itself in the branches of the tree.

It was thought a stunned local golfer raised the alarm after the aircraft – described as looking like a small Cessna plane – crashed down.

Its website describes it as a testing course for golfers who “wish to enjoy a relaxing game”.