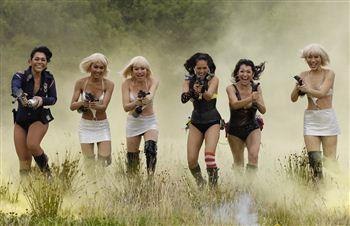 IT HAS to be one of the strangest sights yet at this year’s Edinburgh festival – the Lady Boys of Bangkok armed to the teeth with paintball guns.

They locked and loaded before unleashing a volley of paintballs at friend and Bedlam founder, Roman Rock, at the launch of what is their 11th year performing in the capital.

Roman, 49, admitted it was the first time he’d been blasted by a lady boy, and laughed: “I thought would be quite amusing.

“I had to be a lady boy and they got to blast me – and they really got into the spirit of it.

“I haven’t been to their show yet this year but I’m definitely going to be there.

“Last time I went to see them they dragged me up on the stage – so I can definitely see there being a repeat performance.

“The girls are great fun, they’re really chilled out.  One of the girls, Nite, even did my make-up for me.

“The girls had a cracking time here today.”

The lady boys remain one of the festival’s biggest draws with sell out shows every year.

They can been seen at a spectacular circus style big top tent in the Meadows from 12 August until 5 September.

CABARET – The Lady Boys of Bangkok – The Greatest Showgirls Tour