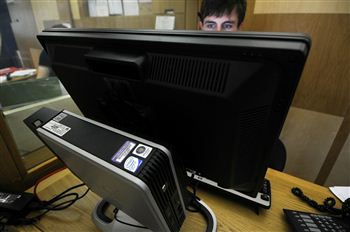 BUNGLING Scottish Parliament chiefs have spent a fortune on new state-of-the-art computers for their MSPs – only to discover the screens are far too big for the desks.

Concerned staff have admitted the size and design of the new PCs means they have no room left to work and are so frustrated by the move they are demanding to have their old screens reinstalled.

Worried aides have also highlighted the fact the new consoles could be breaching health and safety issues because the size of the screen means the computer needs to be placed at the side of a desk rather than straight in front of the user.

A total of 380 computers costing a whooping £300,000 are being replaced in time for the return of the country’s politicians at the end of the month.

Parliament officials claim most of the computers are six or seven years old and are due to be replaced, but staff whom use the PCs daily have accused the parliament of buying screens that are “ridiculously too big”.

One MSP’s researcher said: “The old PCs had 15-inch screens and the hard drive could be tucked away in a slot at the side of the desk.

“Now we’ve got these 22-inch high definition screens and the hard drive is now attached to the back of the screen, so everything is pushed forward.

“We are tight enough for space in these rooms as it is. These new PCs mean there is just no space to work.

“Some MSP staff have said they want to keep the old screens.”

Ridiculously too big for desks

He said: “They are terrific PCs – very fast and the latest models – but they are ridiculously too big for the desks.

“They would be fine for the rest of the building, but the desks in the MSP offices are too narrow in the first place.

“The screen should be in front of you, but because the desk is so narrow it has to be to the side, which means you are twisting and could raise health and safety issues.”

The £300,000 computer bill covers all the desktops in the MSP block and ministerial offices, and includes the 380 PCs being replaced with a further 50 computers also bought for use at a later date.

Each PC cost £480, with the rest of the budget taken up by staff costs and installation.

A parliament spokesman attempted to defend the crazy buying.

He said: “Due to the increasing age of the current computers, we are beginning to experience an increased support overhead and it is becoming more difficult as well to source spare parts.

“As well as performing better, the new computers will cost less money to support and offer energy savings which can reduce our environmental impact.”