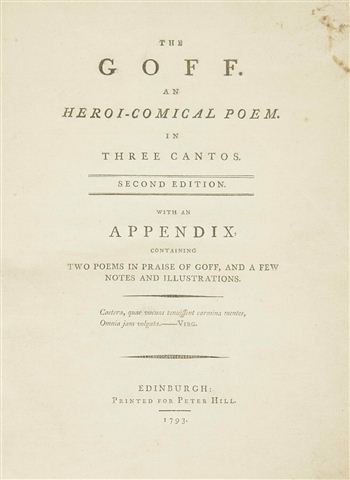 ONE of sport’s rarest books is go under the hammer next week.

The golfing tome is widely expected to fetch more than £30,000 – the equivalent of 230 rounds on the famous Old Course at St Andrews.

The Goff; An Heroi-Comical Poem was first published in 1743 and was written by Thomas Mathison, a Scots legal writer.

The book was the world’s first publication to be devoted entirely to just one game.

It was not until some 80 years after the first publication of The Goff that the second work solely devoted to golf was produced, The Rules of the Thistle Club, published in 1824.

The 32-page rarity satirises in verse a game of golf played on Edinburgh’s Leith Links – one of the first places in the world where the game was played.

But the book is also a valuable document of the times as it offers a rare insight into how the game was played in the 18th century, including the equipment used, the course at Leith Links and the top players of the era.

Golfing experts have described the book as “one of the cornerstones of golfing literature”.

And in a rare opportunity for golf fanatics, a second edition of the book, dated 1793, is to be auctioned off at Bonham’s auction house in Edinburgh next week.

The edition is only one of three left in the world with the other two being treasured possessions of the National Library of Scotland and the United States Golf Association.

Simon Roberts, book specialist at Bonhams, said: “The Goff may be a satirical poem but it is a cornerstone of golfing literature.

“People didn’t write text books on golf in the 18th century – so to have something like this set in print is extremely significant.

“This rare book offers important information as to how golf was played at the time, from the etiquets to the equipment used, as well as revealing the nature of the course at Leith.”

The author of The Goff, Thomas Mathison, was a law clerk who later turned to golf, poetry and the Presbyterian ministry. He passed away in 1754.

The Honourable Company of Edinburgh Golfers, now based at Muirfield, East Lothian, was the first world’s first golf club and was formed in 1744 – a year after The Goff was first published.

The club’s original records show the company produced the 13 “Rules of Golf” for its first competition.

The club originally played on the five-hole Leith Links course before moving to the nine-hole Old Course at Musselburgh in 1836, before finally settling in Gullane, East Lothian in 1891.