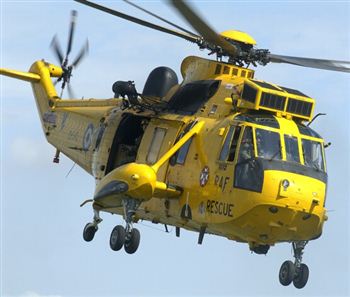 A DRIVER sparked a dramatic rescue after first crashing his car into a truck before wandering dazed on foot across a busy railway line then finally plunging down a 150ft cliff in the pitch dark.

He had a miracle escape after police stumbled across his abandoned silver hatchback on the A90 dual carriageway 10-miles south of Aberdeen after a worried Royal Mail trucker earlier reported being clipped by the car at 10.20pm about a mile away.

But worried police could find no sign of the driver sparking a huge hunt which saw an RAF Sea King helicopter scrambled from Lossiemouth and Coastguard rescue boat and rope teams drafted in to join in the cliff hunt.

Thanks to infra red technology it took the chopper crew just seven minutes to find the driver at Hall Bay, perched confused and lost more than half way down the Muchalls cliffs at 3.45am yesterday (Thursday).

An 11-strong team of brave Coastguard volunteers abseiled over the cliff edge to strap the injured man to a stretcher before he was winched to safety by the Lossiemouth chopper at 4.50am.

Last night police said the man – who hasn’t been named – was recovering with “non-life threatening” injuries to his arms, wrists and shoulders in Aberdeen Royal Infirmary. 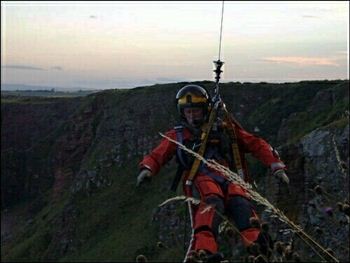 One of the rescue team said: “To say this was a lucky escape would be an understatement. It was a miracle he wasn’t killed.

“He was slightly concussed from the crash, got out his car and wandered around completely lost in a field.

“Somehow he’s got over the railway line seemingly looking for help then fell over the cliff edge.

“Amazingly he’s landed three quarters of the way down on a grassy ledge.

“There’s no question he was sober, the man said he was tee-total while we were waiting for the chopper.”

The Muchalls cliffs, made famous when featured as the set in Mel Gibson and Glenn Close’s 1990 film Hamlet, are popular with tourists for their spectacular rock stacks.

But the rescue centred on an area south of the beaten track and it is thought the man slipped on the rain-soaked grassy cliff-top.

He said: “There are plenty of warning signs in that area because one wrong foot and you could be dead.

“It’s a rough and rugged cliff full of very dangerous and steep drops.

“We heard the helicopter last night and knew someone was in trouble.

“But the fact he survived a fall down the cliff is the talk of the town, nobody can quite believe his luck.”

The chopper’s heat-seeking camera was key to the man’s rescue, according to RAF Rescue spokesman Michael Mulford.

He said: “We sent a Sea King rescue helicopter from RAF Lossiemouth to lend a hand to those already searching for a missing person.

“He was part way down, perched on the cliff face.

“The male was winched off the cliff into the helicopter and taken directly to Aberdeen Royal Infirmary.

“Thankfully it was a very speedy recovery indeed, which is tribute to the operators of the infared camera on the Sea King helicopter.

“It was pitch black but fortunately conditions were favourable which made what could have been a tricky rescue relatively straightforward.”

Grampian Police confirmed they had sparked the sea rescue following a call about a car crash.

A spokesman said: “At around 10.20pm on Wednesday, Grampian Police attended the report of a road traffic collision on the southbound carriageway on the A90, near to the Netherley turn off at Bridge of Muchalls.

“One of the vehicles suspected to have been involved was found a short time later by officers in a field, approximately one mile further south. There was no trace of anyone within.

“As there was genuine concern for the driver of the vehicle, a search was made of the field and a rescue helicopter and coastguard were asked to assist.

“At around 3.45am on Thursday, a 60-year-old male was traced and airlifted from an area part of the way down the cliff. He was conveyed to ARI where his injuries are not thought to be life-threatening.

“Grampian Police is still making enquiries into the circumstances of this incident and it would be inappropriate to comment further.”