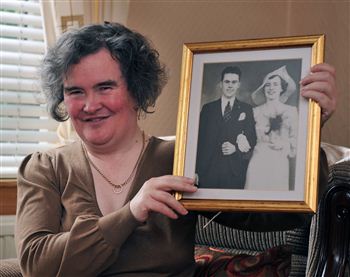 KIND-HEARTED Scottish singing sensation Susan Boyle has been praised after helping out her local carer charity.

The Britain’s Got Talent star received fan mail from two followers in Norfolk saying they wanted to make a donation to a carers’ group, knowing that Susan herself had looked after her elderly mother.

The pair sent SuBo some small gifts and a cheque to be given to a charity or worthy cause of her choice.

SuBo, 48, immediately suggested the cash should go to one of her favourite organisations, The Princess Royal Trust Carers of West Lothian.

Mary-Denise McKernan, manager of Carers’ of West Lothian, said she was delighted to receive the donation after Susan’s recommendation.

She said: “The two fans sent Susan some small gifts and a letter with their good wishes for the future. Also included was a cheque they wanted her to give to a local cause.

“She then sent the cheque back to them saying we should make it out to a West Lothian carers’ charity. They looked us up and the following week the cheque dropped onto out doorstep.

“It was such a lovely gesture and one which we really appreciate. I know Susan cared for her mother for a while after her father died and maybe that is why she thought of us.

“The cash will go towards organising respite and short breaks for carers.”

Susan – who is currently attempting to crack America and has her debut album due in the next couple of months – devotedly looked after her elderly mother until she died in 2007 aged 91.

Susan’s mother, Bridget, was one of her main inspirations to start singing and encouraged her daughter at every turn.

But the shy West Lothian star turned her back on performing for almost two years after her mother passed away.

A regular in her local church choir, Susan paid tribute to her mother’s influence earlier this year.

She said: “My mother used to sing about the house a lot, especially when she was working – so it’s a habit I picked up from her.

“I was a slow learner, so singing was a good way of hiding behind that, and boosting my confidence.

“I believe in Heaven and that my mother is watching me.”

SuBo shot to fame earlier this year when she was initially ridiculed during her performance on the TV talent show Britain’s Got Talent, but had the last laugh when she wowed the judges and audience with her stunning rendition of I Dreamed a Dream from Les Miserables.

The devout church-goer then went on to claim second place in the competition, narrowly losing out to dance troup Diversity.

The first single from Susan’s much-awaited debut album will be Moon River which is expected to be released in October, with the album itself due for release early in 2010.