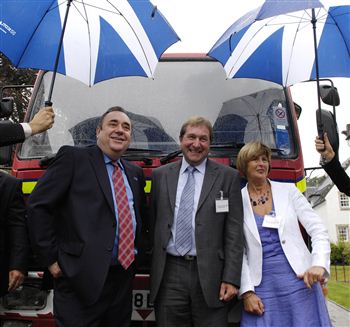 First Minister Alex Salmond waved off the four fire engines and two ambulances before they were ferried to Eastern Europe.

Rescue crews in the Moldovan capital Chisinau still use water from a well to fill their 50 year-old fire truck, while other areas like Nisporeni have no fire service at all.

The SNP leader and his wife Moira were yesterday (Friday) wined and dined at a fundraising lady’s lunch by the Blythswood Care charity as thanks for their support.

He met the 16-strong crew of volunteers who will make a 1,500 mile journey from Rosyth, Fife, on Tuesday.

And he told the fundraising dinner at Houston House, Uphall, that the donation of fire engines will help save lives that otherwise could have been lost.

It will cost around £15,000 to transport the rescue gear, including oxygen cylinders, trauma recovery kits and ladders.

Ahead of their mercy mission, Mr Salmond praised the charity’s big-hearted blue-light donation.

He said: “Scotland is well served by courageous and dedicated firefighters and I’m well aware of the strong bond that exists between them and their professional counterparts across the world.

“However, while we are able to equip Scottish crews with the most modern, up-to-date fleet of appliances, elsewhere in the world communities can struggle to provide a single fire tender to cover large sections of their population.

“Blythswood Care performs great work both in Scotland and abroad and I wish the charity well in its latest humanitarian effort, which can help save lives and protect communities in Moldova.”

The team’s leader, Gary Bennett, said Blythswood had already transported vehicles to Serbia in 2007 and 2008.

He added: “We will be delivering these vehicles to a town where the majority of people have no sanitation or running water.

“The local firemen work with a 1950s water carrier, filing the tank from a well.

“We will be able to supply them with vehicles and with up to date equipment.”