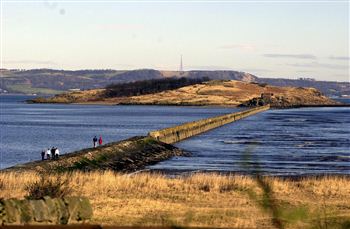 DOPY holiday makers are putting lives at risk by continuing to race against the tide at one of Scotland’s famous beauty spots.

The historic Cramond Island near Edinburgh has attracted daytrippers, tourists and locals to its banks for decades, but there are growing numbers of people getting trapped by the fast, incoming tide.

The speed and the strength of the currents mean that the mile-long walkway between the island and the coast can become treacherous very quickly.

South Queensferry lifeboat station has been forced to rescue 80 people so far this year, more than they normally do in a whole year.

A lifeboat volunteer has now hit back at the walkers who are putting their and his crew members’ lives on the line with their selfish actions.

And responsible visitors to the area are now demanding those caught out by the tides should be fined for their actions.

The warning comes just days after a group of 14 people were left stranded on the island on Saturday. Two teenagers managed to swim back to shore but the remaining 12 had to be rescued by the selfless lifesavers.

Tom Robertson, a lifeboat manager at the South Queensferry station, said: “Our main concern is that increasingly people who are getting cut off by the tide are attempting to dash back to the shore.

“There have already been four incidents of this nature this year and we have rescued 20 people from the water.

“We strongly recommend that anyone who finds themselves cut off to stay on the island and ring 999 and ask for the coastguard. We do not want anyone to put themselves in danger.”

Mr Robertson added visitors to the island should refrain from venturing across the walkway if it is close to the tide times which are posted on a notice board at the walkway.

The average number of callouts in recent years has been 57, but so far this year there have been 79 people rescued from the area.

Gordon Allan, 40, an estate agent from Edinburgh, said: “I’ve got no time for people who deliberately put themselves in harm’s way like adventure sportsmen, then expect to be rescued at someone else’s expense when it all goes wrong.

“The same applies to people that don’t pay attention to warning signs – fine them.”

And teacher Nova Dingsdale, 26, said: “As long as there are clear signposts saying that people rescued on the island after high tide will be fined then they should be forced to pay for the cost of the lifeboat.”

Talks are currently ongoing between the city council and the coastguard about higher profile signage than the current advisory information displayed on the notice board.

A council spokesman said they aware of the problem and additional warnings had already been put in place in the area.