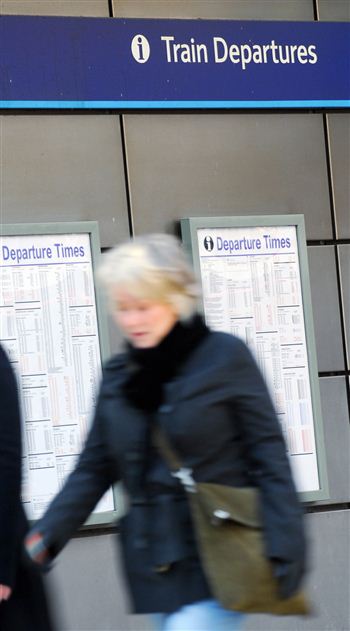 A total of 6978 offences were committed under their jurisdiction. Of those, a staggering 1482 serious crimes and 2870 petty offences actually happened aboard rail or subway carriages last year.

Scotland’s most dangerous station has been revealed as Glasgow Central – with a frightening 548 crimes reported there between 2007 and 2008.

Edinburgh Waverley – gateway to the capital city – was also a hotbed of criminal activity – suffering an undignified 371 offences across the same period including sex offenders breaching their banning orders.

Among the most serious crimes, a rape, reported in the Highlands at Inverness train station.

The vast majority of the major crimes recorded across Scotland’s train stations were for drug related offences, mainly possessions.

But this included those peddling their evil trade in cocaine and heroin.

The British Transport Police, who patrol the train and subway stations in Scotland, record two types of offences separately – petty crime which can often be dealt with by fixed penalty notice and serious crime which needs a more robust response.

The three biggest stations see a huge number of people coming in and out every year – with more than 54 million journeys between them.

Motherwell train station was fourth in the crime league with 92 offences committed – an incredible 80 of them for people drinking booze in designated areas.

But it also suffered 14 serious crimes.

But there an alarming 18 of the more serious crimes took place, including thefts and assaults.

The figures actually represent a very slight reduction in crimes reported, but have led to new calls for urgent action to be taken to prevent crime on Scottish public transport at a time when the public are being encouraged to take the train.

Des McNulty, Labour’s Transport spokesperson, said: “Clearly crime at railways needs to be tackled as a matter of priority.

“If we are to encourage people to use trains and get out of their cars then it is vital that they feel safe at stations and also while they are actually travelling on journeys.

“I will be asking what steps can be taken to improve passenger safety at Scotland’s busiest stations, such as Glasgow Central and Waverley which have the highest number of incidents.

“But I am also keen to see what can be done to improve safety at suburban and rural unmanned stations.”

Earlier this year Kenny MacAskill launched on the spot fines for anti-social behaviour on Scotland’s rail network, allowing British Transport Police to hand out £40 fixed penalty notices to travellers for offences such as urinating in public and breach of the peace.

The first in the country was actually issued to a drunken man caught by police at Waverley Station as Mr MacAskill launched the new initiative, just yards away.

And despite the huge numbers, the Scottish Government said it is doing its best to reduce the risk for commuters.

Mr Kenny MacAskill said: “The public should be able to travel on our rail network without fear of being affected by loutishness, drunkenness and other unacceptable behaviour.

“British Transport Police officers now have the same powers as all of Scotland’s police forces to take action against anyone indulging in such behaviour, helping them free up more time for preventing and tackling more serious crimes.”

Despite the figures, British Transport Police claimed the chances of being a victim of crime on a train journey were “minute”.

They also released figures that showed serious crimes were down in recent years, but which did not include so called non notifiable offences which make up the majority of those committed across the network.

But Chief Superintendent Martyn Ripley, the area commander for the Scottish area of British Transport Police, insisted the railways were “safer than ever”.

He said: “These figures must be put into context. Scotland’s railways are safer than ever with crime falling during each of the last five years.

“There are now more than 80 million passenger journeys undertaken in Scotland each year, so the chances of becoming a victim of crime are minute.

“We do not tolerate criminality of any kind and the travelling public should be comforted by the fact that the rail network in Scotland remains a low crime environment and British Transport Police continues to work closely with our industry partners to ensure it stays that way.”