A PERVERT nurse was sacked after it was claimed he HYPNOTISED patients in order to grope them.

Iain Balsillie, 40, from Fife, was given the boot by B Sky B where he worked as an occupational nurse after two females working at a call centre in Dunfermline claimed he tried to put them into a trance before touching them up. 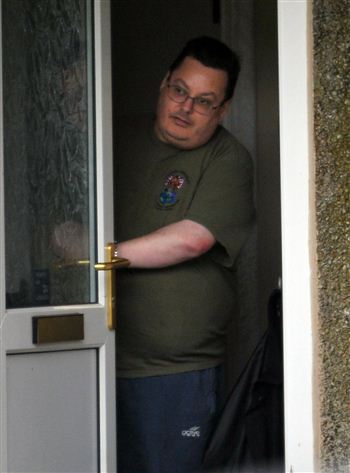 It is claimed Balsillie used the trigger words “drop for me” in an attempt to make women fall into his arms after which he would grab them by the breasts and lower their head onto his private parts.

One woman – who claims she fell prey to his advances – said she felt like she “had been raped” by Balsillie.

The occupational nurse offered to resign over the allegations but bosses at the broadcaster terminated his employment instead.

And it was revealed that after the incidents in Fife, Balisillie was convicted of a similar attack on a woman in Manchester.

He was jailed for 12 months in September last year after admitting sexual assault.

Balsillie was released in March but has been placed on the sex offenders register for 10 years.

He now faces being struck-off by the Nursing and Midwifery Council over the hypnotism claims, as well as his conviction.

A tribunal conducted by the council’s Conduct and Competence Committee, sitting in Edinburgh, heard from a 41-year-old woman who used to work with B Sky B in Dunfermline.

Balsillie was the occupational nurse at the call centre and the woman – known only as “Patient B” – had been referred to him over panic attacks and paranoia in September 2007.

Balsillie – who had been employed with the company since June 2007 – said he could show the woman “relaxation techniques” which she could use when she was feeling anxious.

Patient B said: “He asked me to close my eyes and imagine myself in a field with birds singing. He said this was my special place and he could be there with me too if I wished.

“He told me I could pick my own special place and I closed my eyes and started crying because my special place had been on a beach with my partner.

“Mr Balsillie stroked my hair and fringe and I had to re-arrange it. I felt this was strange and it made me uncomfortable.”

But Balsillie continued with his hypnosis technique, asking Patient B to listen to his voice while he picked up her hand and let it fall repeatedly.

“He asked me if I was sleeping and I said I was even though I was not.

“He stated to me that I would not remember anything that had happened.”

Patient B said at this point Balsillie told her to “drop for him” and she fell backwards into his arms.

She said he held her by the belt loops of her jeans and lowered her head so it was level with his private parts before picking her up in such a way that his hands were touching the sides of her breasts.

The woman said Balsillie was shaking and breathing heavily and she could feel his erect private parts on the back of her head.

Patient B said: “I was awake and alert at all times during the appointment and have a clear recollection. I have never been hypnotised, it seemed to me that Mr Balsillie believed that I was in a trance of some sort.

“It seemed to me that Mr Balisillie had abused the trust I had placed in him.”

The woman said she left the office and told her line manager, but before anything had been done about the incident, Balsillie had asked her back to sign a form for the appointment.

When she returned to his office, she said, a similar attack took place with Balsillie again giving the “drop for me” command – which Patient B followed.

She said that, although she did not believe she had been hypnotised, the command had been a “powerful” one which was difficult to resist.

Patient B went on to say that Balsillie had offered her a “present” and asked her if he had “the nicest voice in the world”.

She added: “I’m not sure why I went along with the techniques that Mr Balsillie had used as they made me feel uncomfortable.

“You trust people, I went in there vulnerable and he abused it in my eyes.

“I felt dirty, I felt like he had raped me. When he offered me a present I dread to think what the present would have been.”

Following the second incident, Patient B again told her boss and following that met with HR officials.

He admitted that he was not trained in these “relaxation techniques” and apologised that what had happened had upset the patients.

Balsillie – who was not at the hearing – offered his resignation but that was refused and he was sacked.