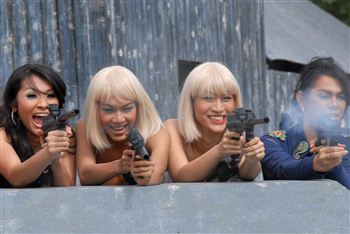 A PAINTBALL firm has been targeted by raiders for the second time in a week.

Bedlam’s site at Queensferry near Edinburgh was hit by sneak thieves overnight on Sunday in a break-in which saw paintball guns, gas grenades and ski masks stolen.

It came just a week after a similar raid at its site in Kirkintilloch near Glasgow.

Police have warned that the stolen items could easily be confused for real weapons.A police spokesperson said: “We are appealing for anyone who may have been in the vicinity last night, and who saw something suspicious, to come forward.

“The paintball guns could be mistaken for a firearm, so we are asking anyone with any information to contact us a matter of urgency.”

The Managing Director said: “I would like to reassure the public that the stolen paintball markers do not pose any threat to public safety.

“In response to these thefts we are currently investing significantly in a variety of new security measures, including the installation of CCTV cameras on site.

“Furthermore, henceforth all our equipment will now be stored in a secure off-site location.

“Finally, I would urge any members of the public with any information about this incident to contact the police as soon as possible.”

He added: “Whilst this latest theft is very concerning, coming as it does in the wake of a raid on our Kirkintilloch site a week ago, our extensive store of back-up equipment means that our operation at Queensferry is already up and running and operating as usual.”

CALA asks Queensferry community to log on and have its say