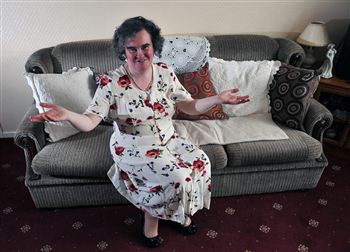 REALITY TV contestants are to be given more support to deal with sudden fame – after Scots singing star Susan Boyle’s breakdown and admittance to a mental health clinic following her success with Britain’s Got Talent.

The final 24 on this year’s hit show the X-Factor are to have full psychological appraisals – because the risk of breakdown is so high.

The measures will also include having a fully qualified psychologist be on-set at all times and having specialist care for one contestant with Asperger’s syndrome.

The measures have been brought in after Susan Boyle’s massive success on Britain’s Got Talent – and her sudden breakdown.

TalkbackThames – which producers X-Factor and Britain’s Got Talent – has also launched the new measures to help contestants to handle intense media attention.

Boyle famously lashed out at a photographer in a London street after weeks of being followed by the press and by fans.

Britain’s Got Talent sensation Susan Boyle enjoyed an explosion of interest from around the world after wowing judges with her performance of I Dreamed a Dream from Les Miserable.

But before her fame she led a quiet life in a semi-detached house in Blackburn, West Lothian – which experts reckon left her unprepared for such pressure.

X-Factor judge, Louis Walsh, says most contestants are completely unprepared for life in the spotlight.

He said: “People don’t realise the pressure these acts are under – especially when they’re competing with everybody backstage.

“It’s a very difficult show to do – even as a judge.

“It’ very gruelling, and it’s 10 weeks of very intense performance.

“Everything you say and do is being watched – it’s a massive reality check for some people.

Richard Holloway – executive producer of Britain’s Got Talent and The X Factor – said lessons have been learned after Susan Boyle was admitted to the Priory.

He said: “We have always had doctors and psychologists and psychiatrists on call if people needed professional help.

“The show keeps getting bigger and there is more focus on it, so we’ve looked at our policies quite carefully and decided that we should have people with us all the way through – particularly with the pressure of audiences at the auditions.”

He said: “What we learned from the Susan Boyle situation was that she had very little pressure from the show, as she only performed three times, but that the pressure came from the huge interest in her.”

“It was dealing with all of that which made it something we had to focus on.

“Once that huge amount of interest was there, it was so overpowering – for us, it is not just a question of care, it is a question of protection.”

Susan Boyle isn’t the only reality TV star to struggle with the pressures of fame.

He was found to have been watching Big Brother alone in his university dorm room when he harmed himself.

Ten-year-old Hollie Steel broke down into tears on live-air at the Britain’s Got Talent semi-final in May.

Simon Cowell allowed the singer to start her performance again after a mistake but she did not make it to the final.

The Government has launched a review to determine whether children need better protection on reality TV programmes.