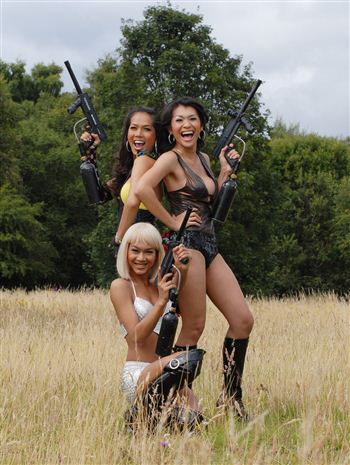 THE LADY Boys of Bangkok plan to protest outside Edinburgh City Council HQ this morning over plans to ban them from their Festival home.

The headliners have performed at the same spot on the city’s Meadows for the past 11 years but now face being given the boot at a meeting today.

The City Council has been put under pressure by Friends of the Meadows and Bruntsfield Links who want to see an end to festivals that they claim leave the parkland areas muddy and littered.

This morning (Thursday) the council will debate the future of the site and determine whether or not to cut the usage down to two weeks – barring most shows from appearing.

The Lady Boys – in full costume and make-up – will protest against the move on the Royal Mile, before sitting in on the debate in the main chamber, saying this could even be their last appearance at the Festival – despite selling out every year.

Philip Gandey – Managing Director of the Lady Boys – hopes to appear before the council to appeal to leave the current restrictions in place.

He said: “The council is trying to make this decision before they’ve seen the affects of the new measures brought in this year.

“There have been all sorts of conditions and restrictions on using the Meadows but we’ve adapted to them and even found the ground in a much better state when we’ve arrived.

“If the council takes the decision to restrict any show to two weeks I don’t see us being able to work with that.

“In any case I would much rather they take the decision after we’ve left in September and they can examine the area and see how the new rules have worked.

“For a few years we’ve had pressure from Friends of the Meadows.

“They say the Meadows is being destroyed – but they haven’t seen how the new measures taken to keep area in good condition have gone.

“When we came here 11-years-ago there were no shows on the site – but because of our success there’s fairgrounds, a circus and many more attractions.

“We’ve cut down the number of caravans, and we’re not allowed to drive any large vehicles over the grass – just two minivans and a Land Cruiser.

The Lady Boys show – which has been the top selling Festival show for the last four years – also brings the circus with them each year.

Philip added: “Because of the having the Meadows we’ve been able to secure top international circuses to come here as well.

“This year we have the Moscow circus, last year the Chinese – it’s important event for the city.

“It takes us five days to set up and two day to de-rig – if we need to we’ll push for a four week show – but two weeks is not viable for us.”

A spokeswoman for Edinburgh City Council said: “I can confirm that the will go ahead on Thursday morning.

“There is a deputised item on the schedule put forward by Friends of the Meadows and Bruntsfield Links.

“But it’s hardly like the Lady Boys are going to be there themselves.”