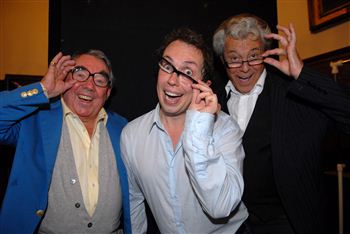 Tiny Scot Ronnie – best known for being one half of the classic sketch show The Two Ronnies – saw the play with TV presenter and tap-dancer Lionel Blair.

Ronnie – originally from Edinburgh and known for his huge trademark glasses – worked during the BBC’s golden years of comedy along side Morecambe and Wise.

Lionel Blair – known for his perma-tan and shock and white hair – has worked in light entertainment and game shows for over four decades.Lionel famously rescued a man hanging from Blackpool Pier by his fingertips with the help of chat show host Alan Carr in 2006.

Bob Golding’s one-man play about the life of Eric Morecambe has been highly praised by reviewers.

The show sees him carry out near-perfect impressions of the comic legend.