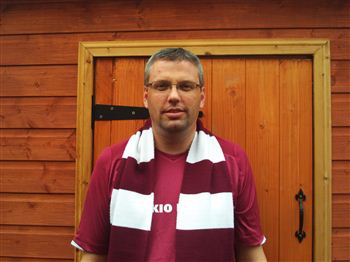 FOOTBALL daft Hearts fans have hired their own Jambo Jet – to fly to Croatia for tonight’s Europa League clash against Dinamo Zagreb.

Thanks to one Hearts mad dad, 118 fans will descend on the Maksimir stadium in Croatian capital for the big game.

Life-long season ticket holder Gary Gray was desperate to get to Croatia for the big game – but would have to fly half-way round Europe to get there.

So Gary – who lives in Currie near Edinburgh – chartered a private plane for £40,000 and posted the wacky jaunt on the Jambos Kickback website.

Within a few days the 41-year-old had over 400 texts and countless emails about the trip.

And the proud dad – who has bought his five-year-old son Adam a season ticket already – reckons it was all worth it.

He said: “I was looking to get flights to Zagreb, but there wasn’t anything viable – I was going to have to fly half way round Europe to get there.

“I started looking at charter planes and started to get some names together for the flight.

“I had a few problems though – I needed £56,000 to book the plane and I was going to have to go and collect all the fans cash for the flight.

“It wasn’t going to work – especially as I only knew five of the fans myself.

“In the end I went with a firm called Flight Options.

“They’ve done flights for Arsenal and Celtic and they even flew the Tartan Army to Norway last week.

“They offered me a 118 seater plane and even agreed to takeover the ticket handling – which was a relief.

“I can’t believe we did the whole thing without advertising – it was all through Jambos Kickback.

“It’s been a bit last minute – the firm only got back to me on Thursday – but it’s going to be a great trip.

“A lot of the guys weren’t able to take three days off to take the trip – so I booked the flight for 7am and the return flight for just after the game.

“In the end we got the flight for £345 – even cheaper than we thought at first.”

“The club are delighted as well – we’ve boosted the numbers quite a bit.

“I’m not out there for any glory – I just wanted to get as many Hearts fans as I could out there – and we got it.”

Wife Lesley, 39, was a bit worried when her husband told her he was booking a plane to fly to Europe – with 118 other fans.

She said: “When he told me he was going to book a plane for a 118 fans I thought ‘oh my God what has he done’ – but it’s all come together.

“He’s always been really active with Hearts and I’m glad he did it in the end.”

Gary added: “I always look forward to the day out – not just the game.

“We might not come back with a victory – but it’s going to be a great day out.”