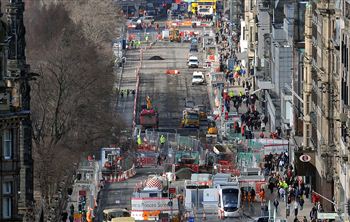 EDINBURGH’S transport nightmare may be eased after the City Council backed TIE – the firm tasked with bringing about the troubled city trams.

Today the council unanimously backed the transport firm in its efforts to finish the huge project after severe delays and costs spiralling out of control.

Last week TIE entered into formal talks with the Bilfinger Siemens CAF consortium to review the costs of the tram project and assess the main risks remaining.

Councillor Gordon Mackenzie, Convener of Transport Committee, said: “We are delighted that all parties in the council have united to support TIE in this process.“I believe people in Edinburgh will welcome the news that we have come together on this issue, putting aside our differences on the trams principle, to serve the best interests of the city and the public purse.”

The Liberal Democrat’s – who control the City Council – said the chamber would unite behind the tram project.

Their statement said: “While recognising there are divisions on the principle of trams, the Council is united in expressing its ongoing determination and full support for tie’s efforts to continue to protect the public purse from the effect of undue programme delay.

“And to protect it from any unwarranted financial claims not provided for within the agreed contract signed by all parties involved in the trams project.

“The Council fully acknowledges that TIE Ltd has put extensive efforts into resolving issues at dispute with the contractor through negotiation and mediation – but that this approach has not produced the desired resolution.

“We support the utilisation of the clearly documented dispute resolution procedures within the agreed contract, as a means of ensuring the most appropriate resolution of outstanding commercial issues to ensure best value for money for the public purse.”

Phase 1 of the Edinburgh Trams project – which will run from Haymarket to Leith – is due to be completed in summer 2011.

The new tram system is expected to be one of the most advanced in the world.

Edinburgh’s previous electric tram system was in use from 1923 to 1956.