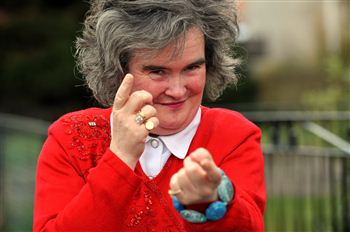 A JAPANESE film crew are searching for Susan Boyle fans to join them in her home town to celebrate her rise to stardom.

The team – who are travelling from Tokyo for the project – are planning a programme all about Boyle-mania.

American Leslie McMillan is already signed up to show the group around Boyle related landmarks like the Happy Valley Hotel in West Lothian.

And now she is returning to the town with her sister to take part in the documentary.

The show is being made for Tokyo News Remix on NHK (Japan Broadcasting Corporation) and will only be broadcast in Japan.

She added: “In our first episode we are showing a story about the Susan Boyle phenomenon and coming to film in Blackburn on September 4.

“We are visiting Susan Boyle spots with two big American Susan Boyle fans and are looking for more people to join the tour for filming.

“It would be amazing if people could wear Susan T-shirts or badges, or anything that would show their support for Susan.”

Fans who want to take part should email [email protected] for details.