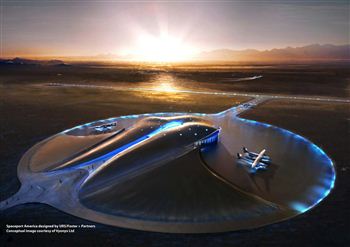 A MYSTERIOUS RAF base in Scotland could soon be home to the world’s first spaceport.

Virgin Galactic has already scouted RAF Machrihanish on the Mull of Kintyre for their first space terminal.

Machrihanish is currently an active airfield – but during the Cold War it served as a top secret base for intelligence officers and a training base for US Navy Seals.

Will Whitehorn, President of Virgin Galactic, confirmed that three locations in Scotland have been scouted already.

He said that Lossiemouth is currently the favourite after “positive talks” with the local council and the RAF.

But he added that the Machrihanish – which has a massive 10,000-foot runway – and RAF Kinloss are the current back-ups.

The site also already has a huge Gaydon hanger -rumoured to be once have been the home of a US Air Force B-2 Spirit stealth bomber.

Lynda Henderson – who is running an internet campaign to bring the space race to Argyll – reckons Machrihanish is just the place for the world’s first spaceport.

She said: “An imagination such as Richard Branson’s could have so much fun with it.

“Machrihanash is full of weird and wonderful tales – it would be astonishing for Argyll to have Virgin Galactic based here.

“We have been driving this because it would be good for Argyll’s profile and fun for everyone.”

He said: “We never really knew what went on down there – but heard talk about secret underground bunkers and all that kind of stuff.

“There are things in the sky flying around, but we just don’t know what they are.

“There have been plenty of tales, of lights passing over fishing boats and people jumping overboard.

“I have seen things too – once a giant orange orb flew right over my car.

“If Richard Branson wants a nice, long, quiet runway, it would be perfect for that.

“And it would be great of one of the first space flights was from here.”

Watch made from bits of classic RAF warplanes could fetch over £5,000 at auction

Corrie McKeague’s dad shares poignant new picture of them together