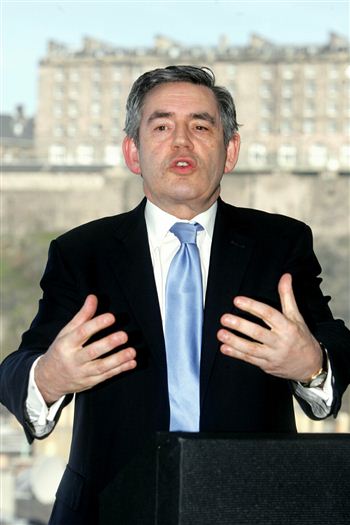 A TOP US diet expert has blasted the Prime Minister’s anti-obesity campaign – because he is too fat himself.

Author Steve Siebold – who has received death threats for telling people they’re too tubby – reckons that Brown should shed the pounds before lecturing people on their weight.

He said: “When someone like Gordon Brown is overweight it sends out a message to millions of young people.

“People like him and Oprah Winfrey are role models – they really ought to look in the mirror.”

Earlier this year Brown blasted cartoonists for portraying him “far too fat.”

And last summer Brown, 58, hired a top personal training for £50-an-hour to try to get fit.

Steve – author Die Fat Or Get Tough – says people need to take control of their own lives more.

He said: “We get bombarded with messages and adverts saying “It’s not your fault’ – well it is your fault.

“You’re the one putting food in your mouth – that’s what people need to understand rather than trying to blame everyone else.”

“I went on national TV the other day – which went out to about ten million people – and I told them it is your fault if you’re too fat.

“I’ve had death threats – probably about 2000 vicious emails from people calling me a Nazi and comparing me to Hitler.

Two-year-olds referred for obesity treatment by Scots health board

Anti-fat attitude classes should be rolled out in schools, scientists claim