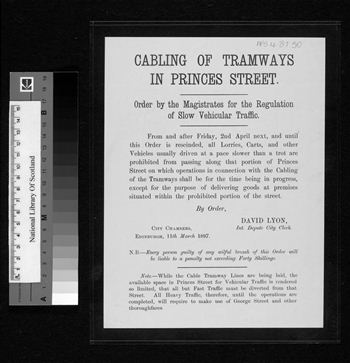 EDINBURGH’s hellish tram system has been a thorn in the side of the Capital’s motorists for more than 100 years, according to recently unearthed documents.

In an eerie echo of modern disruption, drivers on Princes Street in 1897 faced a fine of up to 40 shillings – £130 in today’s money – for driving on the busy thoroughfare while tram lines were being laid.

The National Library of Scotland has unearthed the 112-year-old poster, which dates from when Edinburgh’s original tram works were being installed for the first time.

The notice warns “lorries, carts and other vehicles usually driven at a pace slower than a trot” that they faced the steep fine if they disobeyed the ban.

Bruce Blacklaw, a spokesman for the National Library of Scotland, said: “It’s funny to think that Edinburgh’s commuters were negotiating alternative routes around the city centre while tram works were taking place 112 years ago.

“We also have a film in the Scottish Screen Archive collection which shows these tramlines being removed in the 1950s to make way for buses.”

The current tramworks have brought chaos to the city transport network and remain at the centre of budget disputes between the builders and Transport Initiatives Edinburgh.

Phase one – running from Haymarket to Leith – is due to be completed in summer 2011.

But there remain doubts if it will be completed in time or within its £545million budget.

The last time Edinburgh had an electric tram was from 1923 until it was suspended in 1956.