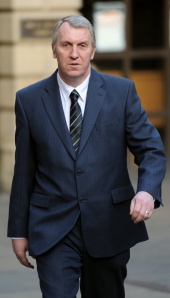 A GYM coach accused of abusing pupils as young as 10 says child protection rules are “draconian.”

Trampoline teacher Mitchell Dolphin, 51, claims he had “perfectly legitimate reasons” for massaging young girls’ legs with oil and allowing them to sit on his knee while he cuddled them.

But he told a court yesterday (Mon) that child protection laws were outdated and that he only rubbed the youngsters’ legs because he “couldn’t afford a physio.”

He was giving evidence on the 13th day of a trial at Edinburgh Sheriff Court, where he faces sexual assault and lewd and libidinous behaviour charges, said to have occurred over a period of 22 years form April 1986 to February 2008, involving 13 girls.

Four of the girls gave evidence in court, claiming Mr Dolphin abused them in the Lo-Gy Centre in Loanhead, Midlothian, which he ran as a charity.

The former director of British Gymnastics, Lloyd Readhead, previously gave evidence that he believed a coach cuddling a child would be “completely inappropriate.”

But Mr Dolphin, the son of a pair of Army fitness instructors, said yesterday he disagreed, saying he preferred to teach by his “own perspective.”

He said: “Some people will read the child protection policy book and run a mile, whereas my own perspective is to get the best out of gymnasts, rather than the dogmatic following of more and more draconian regulations.

“It may well be Mr Readhead’s opinion that cuddling is not appropriate, but I disagree.

“The fact his line is slightly different to where I draw the line is for him and I to resolve.”

And when asked by fiscal depute Melanie Ward about allegations that he touched a 10 year-old pupil inappropriately, Mr Dolphin was quick to defend his actions.

He said: “I did massage her thighs but it was with oil, not baby oil as had been alleged, and there are perfectly legitimate reasons.

“She had an injury which eventually ended her promising career, but before then I saw it as one of my functions as head coach to relieve the lactic acid build up in her legs.

“For me to employ a physio would result in costs which if incurred would have been detrimental to the running of the gym; I could not afford it.”

Mr Dolphin, who has been suspended from gymnastics teaching, denies all charges against him, and the trial before Sheriff Frank Crowe continues.