A LITTLE known Scots actress has landed a big role in a top US detective series – with over 13 million viewers. 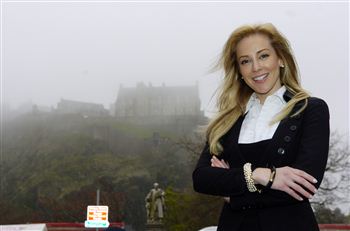 Louise Linton beat-off stiff competition from thousands of hopefuls to land a star role in Cold Case – a hit drama that features a team of cops investigating unsolved crimes.

The 28-year-old – who is originally from Edinburgh – is thrilled to be on set already, playing a fighter pilot in the hit drama – which is shown all over the world.

She said: “Cold Case is one of my favourite shows so I was thrilled when I found out that I had got the role.“I had to go back to read at Warner Brothers three times for it before they made their decision.

“For any given role there can be thousands of submissions and the competition is incredibly intense.

“Acting involves a lot of disappointment and requires the ability to swallow your pride and roll with the punches.”

But Louise is no stranger to gritty cops shows – in 2007 she had her first big break with a part in CSI: New York – a hit forensic police drama.

And in the same year she landed a small role in the Tom Cruise blockbuster Lions for Lambs.

Despite her hectic life in Los Angeles, Louise has still found the time to do a journalism degree at Pepperdine University in Malibu, study part time for a degree in law – and marry her legal expert hubby Ronald Richards.

But despite her success in the States, Louise still misses Scotland more than anything.

She added: “Life in Los Angeles is dynamic – but my heart remains in Edinburgh.”