THE AGE-OLD image of Scotland’s libraries is one of prim, bespectacled librarians sorting through dusty old books while shafts of sunlight try and break through into the large, silent rooms.

The rise of the internet and other communication tools has recently shattered that illusion and sent the country’s libraries hurtling into the 21st century with computer terminals a common sight throughout every library building in the country.

But, library archivists in Edinburgh are continuing to defy the rise of the computer age as they continue to pour over copies of every book, newspaper, magazine and newsletter ever printed in the UK. 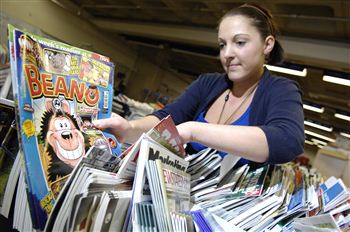 For more than 400 years a vast repository of the nation’s documents, books, magazines, newsletters and pamphlets has been painstakingly maintained and archived to form a vital part of the UK’s heritage.

Five of the country’s most important libraries have the power of Legal Deposit – meaning publishers are legally obliged to submit copies on request of everything they produce.

But now The National Library of Scotland (NLS) has been given the honour of becoming the new central repository after the Agency for the Legal Deposit Libraries (ALDL) moved its whole operation from its long-time base in London.

Each of the institutions can request a copy of any published material which has been distributed in the British Isles and Ireland within 12 months of its publication date.

On receiving such a request from the agency, a publisher must supply a copy for each of the requesting libraries under the terms of the Legal Deposit Libraries Act 2003.

All requested items are sent to the ALDL’s central repository, now in Edinburgh at the National Library of Scotland’s building in the Causewayside area of the city.

The items are then meticulously sorted and allocated to the other legal deposits throughout Britain.

The National Library of Scotland’s own collection grows at the rate of 6,000 new items every week, but in the three months following the transfer of the Agency to Edinburgh in March over 130,000 additional publications have passed through the Causewayside building for distribution to the other libraries.

Martyn Wade, National Librarian and Chief Executive of the National Library of Scotland, said: “We are delighted to have brought the Agency for Legal Deposit Libraries to Scotland. This move will help all of the legal deposit libraries by reducing costs and improving workflows.

“It will also enable us to improve relationships with the publishing community with added flexibility and collaborative working practices.”

The previous ALDL operation was supported by Cambridge University and operated from leased premises in Euston Road in central London.

The ALDL decided not to move to another premises in London because the five legal deposit libraries who run the agency wanted to integrate the agency processes with their own and this was best achieved by co-locating within an existing library.

The National Library of Scotland was the only one of the five libraries with the correct facilities the agency could move into.

The principle of legal deposit has been well established for nearly 400 years and has great advantages for writers and publishers as publications deposited with the ALDL are made available to the various libraries’ registered users, preserved for the benefit of future generations and become part of the nation’s heritage.

And although publishers are required to send at least one copy of their publications to the NLS free of charge, in practice many publishers deposit copies with all six libraries without waiting for a claim to be made.

The legislation covering legal deposits currently covers printed publications, but will in future be extended to include electronic publications.