A PLUCKY penguin who suffered months of pain in its feet is on the road to recovery after kind hearted keepers fitted it with a pair of custom made waterproof booties.

Rockie the Rockhopper was struck down with a bad bout of Bumblefoot and his tender feet needed protecting.

So kind caring staff at the popular visitors attraction fashioned him a natty pair of boots to protect them from the sharp rocks in his enclosure.

Bumblefoot is a bacterial infection in birds that causes the feet to swell and become inflamed.

Notoriously difficult to control, it is more common in animals in captivity and has caused problems at Edinburgh Zoo for a few years.

To allow the treatment to work, staff usually use spray plaster on the penguins feet to seal in the medicine. 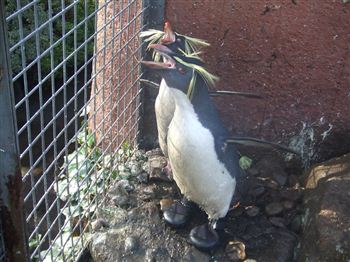 But Rockie’s condition was particularly bad and they had to come up with something more effective.

Penguin keeper Lynda Burrill said that the boots – made from the same material used for wetsuits – were needed to give the feet time to heal.

She said: “Use of the neoprene boots protected the soles of Rockie’s feet from rough surfaces, minimised the likelihood of any secondary bacterial infections and gave his feet time to heal.”

For around two months Rockie wore his booties for two days and then had them taken off for another two days to let his feet breathe.

But now that his tootsies are back to normal Rockie will be going bootless and waddling around the penguin enclosure with happy feet.

Lynda said: “Even though wearing the boots did not stop Rockie from getting around the enclosure, it is hoped that regular preventative treatment will avoid him have to wear the boots in the future.”