Tears as tragic teen Kirsty Blair is laid to rest

Schoolgirl Kelly, 16, from Musselburgh, was found dead in her bed by devastated relatives at their family home last Thursday morning. 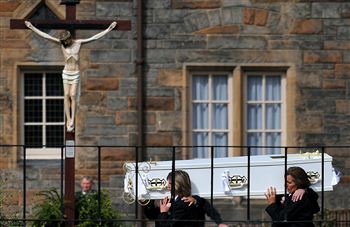 It is thought the pretty teenager from died from Sudden Adult Death Syndrome – commonly known as Adult Cot Death.

Family and friends – including Kelly’s mother and father Keith and Annette, older brother Jamie, and younger siblings Holly and Jack – made their way to Our Lady of Loretto and St Michael’s RC Church in Musselburgh to say their final goodbyes.

The emotional hour-long service was conducted by the Blair family priest Canon Joseph McMullan who paid tribute to the “bright and vivacious” girl who had a “great sense of style and fashion”.

Canon McMullan, who baptised Kelly and gave her first communion, also said the 16-year-old was “a great credit to her parents”.

The funeral cortege arrived at the chapel shortly before 10am and the teenager’s white coffin was accompanied by floral tributes along with a large bunch of white and pink balloons.

During the touching Requiem Mass, during which friends and family could be heard sobbing throughout, those attending sung the hymns Do Not Be Afraid, On Eagles Wings, and The Love I Have For You My Lord.

The mourners made their exit from the large ornate chapel to the sounds of Ave Maria, beautifully sung by one of the chapel’s choristers.

Following the ceremony the youngster was taken to the nearby Inveresk Cemetery for a private family burial.

Sudden Adult Death Syndrome is thought to claim over 500 people in the UK every year.