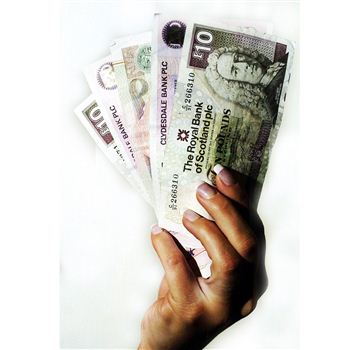 CASH machines could soon be dispensing money in the Scots language following the introduction of Cockney ATMs in London.

Manufacturer Bank Machine is considering operating up to 250 cash machines in Glasgow and Edinburgh using the Scots language to give them “local interest”.

And the move has been welcomed by pioneers of the dying tongue, who argue that is will keep the language alive and interest tourists.

Dr Christine Robinson, director of the Scottish Language Dictionaries in Edinburgh, said: “We’d be delighted to see it happen and would be happy to help with the translations. Scots is, at present, completely invisible in the public space.

“Furthermore, there are still a large number of Scots who, because they were criticised for their speech at school, think they are speaking slang or bad English when they are actually speaking perfectly good Scots.”

The company insist that it isn’t just a bit of fun, but an attempt to recognise the rich dialects across the UK.

Ron Delnevo, Managing Director of Bank Machine, said: “We wanted to introduce something fun and of local interest to our London machines.

“Whilst we expect some residents will visit the machines to just have a butchers, most will be genuinely pleased as this is the first time a financial services provider will have recognised the Cockney language in such a manner.”

Users in London currently have the option to use the machines in English or Cockney, and are offered a “speckled hen” instead of £10.

If the scheme were extended to Scotland, mini statement would be replaced with “wee statement” and customers would be offered “bawbees” instead of money.

SNP MSP Dr Bill Wilson is a long-time campaigner for the Scots language and welcomes the scheme.

He said: “Increased visibility would give us the confidence to use the language and improve our self-confidence in general.”
See more of our pictures at our Flickr site and videos at our dedicated channel,  Deadline TV.