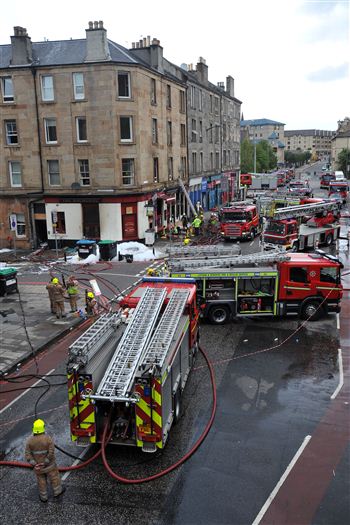 UNION officials have slammed Scotland’s fire services for cutting staff when fire-related deaths are on the rise.

Ken Ross from the Scottish Fire Brigades Union has criticised the cutbacks revealed by a survey carried out by the union.

They found that services across the country have lost one in 12 of their operational firefighters in the past four years as they have been moved to fire prevention.

And overall 220 full-time frontline posts have been wiped out since 2005 – which is the equivalent of 50 emergency crews.

The organisation has hit out, saying the cutbacks are leaving the public in danger.

Scottish FBU organiser Ken Ross said: “We are losing so many people that we are getting to the stage where levels are dangerous.

Ken said it was because four years ago community safety became the responsibility of the fire brigades, and they have taken staff off frontline jobs to carry it out.

He added: “Because the number of staff deployed on incidents is fewer than before, it becomes more difficult for crews to follow procedures. Inevitably, in these circumstances, corners may be cut which compromise safety.

“If you reduce the required levels of resources that go to an incident it is potentially more dangerous both for crews and those they seek to assist. If operations cannot be carried out properly that compromises the ability to resolve the incident safely.”

The survey revealed that 124 posts had been cut in Strathclyde, 44 in Grampian, four in Dumfries and Galloway, eight in Fife, and 20 in Lothian and Borders.

And politicians are appalled at the revelations, saying that more needs to be done to ensure public safety.

Labour justice spokesman Richard Baker said: “The FBU already has concerns about safety and clearly it is vital to have the right number of firefighters to protect the public.”

But fire chiefs deny that there is a shortage of frontline staff.

Steven Torrie, spokesman for the Chief Fire Officers’ Association, said: “There is no policy of reducing frontline staffing in Scottish fire and rescue services.

“All the services will act independently to calculate the optimum number of staff for their needs, on the basis of careful analysis.

“Over the past few years that analysis has become much more sophisticated and much more focused on the risk to life rather than to property.”

Bright eyed and bushy tailed – Could this be Scotland’s cutest red squirrel?