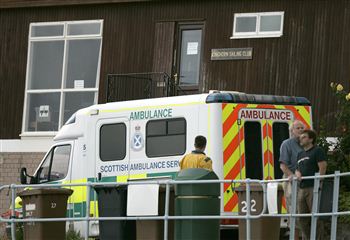 A WOMAN has been taken to hospital after surviving a 70-foot fall from a cliff onto the rocks below.

A lifeboat crew – who were just 300 yards away – raced to the scene at Kinghorn beach in Fife, before ambulance and the coastguard arrived.

The incident took place around 3:20pm this afternoon.

It is not yet known how the woman – who is thought to be around 75-years-old – fell from the cliff.A spokesman for the ambulance service confirmed that an ambulance was in attendance.

He said: “She has various injuries but they are not believed to be life-threatening.

“She was conscious and breathing when ambulance arrived.”

A spokesman for the Forth Coastguard said: “The lifeboat was first on the scene, then the coastguard, then ambulance, all within six minutes of each other.

“The lifeboat was just 300 yards away, but they didn’t see what happened.

“All we’ve heard is that she has injured her head, back and legs.”

The woman was taken to Queen Margaret Hospital in Dunfermline, after paramedics initially treated her at the scene.