Battle to save Johnnie Walker plant goes to Holyrood

THE BATTLE to save hundreds of jobs at one of Scotland’s oldest distilleries entered was stepped up tonight as MSPs backed by workers took their fight to Holyrood.

Despite announcing profits of almost £2bn for the last year, drinks giant Diageo plans to axe 700 jobs at its Johnnie Walker plant in Kilmarnock as part of a 900 job cull.

Angry workers from the plant travelled to the Scottish Parliament, along with the whisky band’s iconic ‘Striding Man’ and the Johnnie Walker girls.

Gina McCurry, 52, has worked as a forklift driver at the Kilmarnock factory for 10 years, and said that the decision would “devastate” countless families.

She said: “Before this happened on 1 July I would have said that Diageo are great to work for, with excellent terms and conditions and family values.

“However since then it’s been a hammer blow to people of Kilmarnock and of Ayrshire.”

She added: “There are people who have worked at the plant for thirty years – some people even have grandchildren that work there.

“If they were making losses you could understand it more, but the fact that they are making £2bn profit just doesn’t bare thinking about – why are they doing this to us?

“They pride themselves on being a family-values company, but how can they say that when their decisions are devastating families. 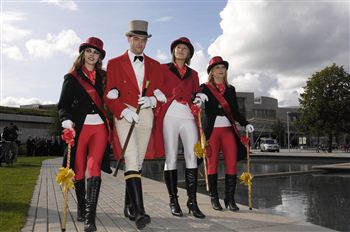 “There’ll be no future for Kilmarnock as there’s no other employment – Diageo are the biggest employer.”

On the first day of the Scottish Parliament’s return from recess, members were due to debate a motion tabled by Kilmarnock & Loudoun MSP Willie Coffey condemning plans to close the plant.

Diageo, who make Smirnoff vodka, Gordon’s gin and countless other world-renowned brands, have been locked in talks with the Scottish Government since the decision to axe jobs was announced.

Mr Coffey, 51, said: “Since Diageo made their announcement on 1 July, there has been a huge amount of work done on a cross party basis to halt this damaging proposal.

“That the parliament is to debate this on the first day after recess shows how seriously all parties view this threat, not only to Johnnie Walker and Kilmarnock, but also to the Scotch whisky industry.

“It is absolutely right that we ask why a company that is making billions in profit each year is walking away from such an important part of the industry’s heritage. ”

Cheers to that: Scots whisky maker setting down her glass after 45 years in industry