A JURY has been sent home to consider a verdict on a top Scottish gymnastics coach accused of child abuse. 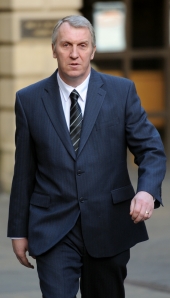 Mitchell Dolphin, 51, is alleged to have carried out a 22-year campaign of “sneaky” sexual assaults on girls as young as 12.

Jurors spent over five hours deliberating today (Wed) at Edinburgh Sheriff Court but were released for the night after failing to reach a decision.

They must decide whether the trampoline teacher is guilty of 18 charges of sexual assault Lo-Gy Centre gym, at Lasswade High School, in Dolphin’s former home, in his car and at a caravan site in East Lothian.

Mr Dolphin, who was accompanied at court yesterday by wife Shirley and his two step-children, has denied all charges against him throughout the four-week trial.

Evidence was heard from four of his former pupils, now in their 30s, who claimed he abused them during gymnastics classes.

The trampoline coach was said to have touched the youngsters’ breasts, squeezed their buttocks and made them straddle his lap in the gym.

It was also claimed he forced one girl to kiss him, while another said he had records of her menstrual cycle closely monitored on a calendar.

His alleged tactics were branded “sneaky” by prosecutor Melanie Ward during the trial.

When he gave evidence, Mr Dolphin was quizzed over the massaging of young girls and supposedly “inappropriate stretching techniques.”

But Mr Dolphin- the son of a pair of Army fitness instructors – claimed he acted “perfectly legitimately” because he said he couldn’t afford a proper physio.

He remained adamant that he was trying to develop a “family atmosphere” in the gym.

He was arrested in April last year and suspended by Scottish Gymnastics.

He lived just a few doors from the converted church where he ran the Lo-Gy Centre gym in Loanhead, Midlothian, but has since moved to Newtongrange.

Sheriff Frank Crowe reminded jurors not to discuss any evidence with anybody.

The court is due to resume tomorrow morning (Thurs).