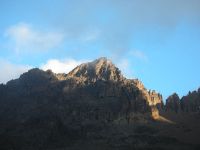 Dundee charity Aberlour are planning to send 100 keen adventurers on the tartan trek in the footsteps of Cheryl Cole, Ronan Keating and Chris Moyles.

And the team will even have top mountain guide Raj Joshi who braved tantrums and strops to get the celebs to the summit for their Comic Relief fundraiser last year.

The trip – which costs £2200 per person – is scheduled for next September and long-time fundraiser Bill Cook, 55, hopes he can make it happen.He said: “Last year my pal John and I drove 4000km across India in a rickshaw for Aberlour – then thought what shall we do next?

“I know lots of people want to climb Kilimanjaro at the moment because of the TV show last year.

“So we want people to come with us and enjoy the sight of 100 kilts and the glaciers on top of Africa’s highest mountain.

“If we do get 100 people we’ll split into four teams and go up the summit from different routes.

“The summit is difficult – but the motivation when the people see the other groups coming up from different sides of the mountain will be brilliant.

“They’re not going to have kilts but they’re going to be wearing Rangers and Celtic tops and everything – and waving Saltires.

“I reckon the that image of the summit covered it tartan would be a great sight.”

Aberlour is one of Scotland’s largest children’s charities and currently works with 6,000 children and families on issues ranging from alcohol and drugs to disability.

And their fundraisers are no strangers to the 20,000 foot volcanic mountain – which is the tallest mountain in Africa and the highest free-standing mountain in the world.

In 2004 Bill – who works for Scottish Enterprise – and friend John Henderson, 55, – who owns a welding firm – climbed Kilimanjaro for the first time.

They followed it up with the first ‘Kiltimanjaro’ – with all the team wearing kilts – in 2008.

In April of this year they completed their trek across India by rickshaw where according to Bill “we were nearly killed every day”.

Bill added: “It’s not that difficult – John and I have been up top twice before.

“It’s an experience that you will never ever forget.

“I think we hold the record already – we’ve been up before with 16 people wearing kilts – but this will top that.”

The charity insist that they won’t make the adventurers go true Scotsman – as it can get to –26C at the Uhuru Point summit.

Farting in public the most embarrassing thing for Scots