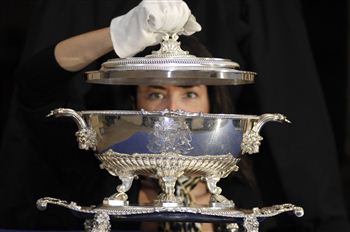 AN EXQUISITE silver soup tureen once used by the kings and queens of Europe now has pride of place at the National Museum of Scotland.

The tureen is one of over 500 fine dining pieces supplied to the flamboyant Scottish ambassador Alexander, 10th Duke of Hamilton – who wowed aristocrats and even royals with his lavish tastes.

The collection was given to Alexander when he took up his posting to St Petersburg in 1807 to assist him with his official duties.

The Government had paid nearly £4,000 for the collection, but Alexander did not consider it that impressive – and spent a further £5,000 on other items.However the Duke was unsuccessful in his role as ambassador and spent much of his time courting wealthy women with racy pasts.

Godfrey Evans, Principal Curator, National Museums Scotland, said: “This silver service is equivalent to buying a top of the range sports car today – a very visible symbol of your status in society.

“As his ambassadorial post was unpaid, the service was considered one of the perks of his office, and he would have used it to impress and outclass his contemporaries.”

“This tureen is superbly crafted and is a major addition to our representation of the extraordinary story of the 10th Duke of Hamilton.”

Alexander was also known as an extravagant collector of rare items and later bought the royal tea service set of the Emperor Napoleon, which had been made for his marriage to Marie-Louise.

After the Bourbon Kings of France had been restored to the throne the tea service could not be used as it was emblazoned with Napoleonic references – and Alexander was able to add it to his collection.

Along with Napoleon’s tea service, the Duke later also acquired the travelling service of Napoleon’s sister, Princess Pauline Borghese in 1825, both of which are held at the National Museum of Scotland.

The tureen and stand were acquired from a well-known Canadian family at an auction in New York earlier this year.

School children turn into scientists for a day