SCHOOLKIDS have been banned from cycling to school due to “security reasons.”

Pupils at Canal View Primary in Edinburgh have been forced to ditch their bicycles because the school does not have a bike shed. 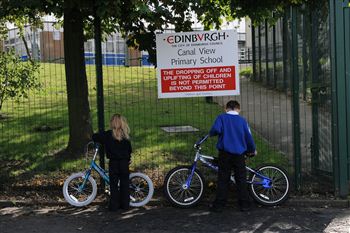 The school say chaining the youngsters’ bikes to fences would affect security.

Angry parents blasted the school for preventing their children from exercising, saying a proper bike storage area should have been included in the school’s recent £4.3million refurbishment.

Nicky Scally was told by the school’s headmaster that her children Shaun, 11, and Holly, 6, would not be able to bring their bikes to school anymore.

The youngsters had just moved to Canal View after their previous school, Westburn Primary, closed down.

Nicky said: “During the consultation to close Westburn, both Councillor Marilyne MacLaren and director of education Gillian Tee said my children would receive a better education at the receiving schools and there would be more opportunities for them to participate.

“I was under the impression that would be mean more clubs and sporting activities that would benefit my children.

“Since they started at Canal View after the holidays, I have been getting my kids to cycle to school, but the headteacher told me they can’t do this because there are no bike racks to store their bikes – that’s pretty poor in this day and age.”

She said: “It’s ridiculous when they are supposed to be encouraging children to be outdoors more and do more exercise that they are in effect refusing to let them do this.

“Anything that gets the children active should be worth it and all the schools should have the proper facilities so that children are not told they can’t cycle to school.”

He said: “The school is set to get bike racks but in the meantime, for security reasons, the school are keen that the bikes aren’t chained to the railings.

“Where schools feel they need a bike rack, we are doing our best to fit them, and we are in the process of doing that across the city.”

He said: “The city council should be encouraging kids to cycle to school, not calling their bikes a security risk and banning them.

“We’re trying to cut down on the school run: it’s bad for pollution, bad for congestion, and bad for kids’ health.

“Until they get proper bike racks installed, the council should relent and let these kids use the railings like they’ve always done.”

Study reveals more Scots are cycling due to environmental concerns