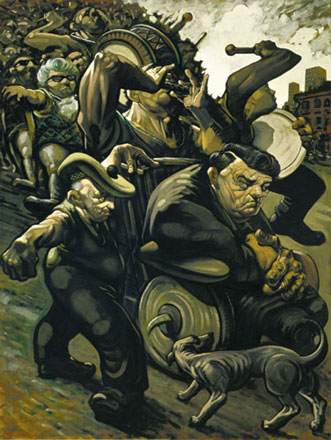 ONE of the most famous works of art from top Scots painter Peter Howson is expected to fetch £70,000 when it goes under the hammer later this month.

Blind Leading the Blind III features Bond actor Robbie Coltrane sitting in a wheelchair among amidst a surreal fanfare in Howson’s trademark ‘grotesque’ style of caricature.

Artist to the stars Howson – who has previously painted Madonna and Michael Jackson – is one of several high profile Scots artists whose pieces will feature at The Scottish Sale in London on 30 September.

Robbie Coltrane is not named on the painting, but Howson, 51, confirmed that the work was closely based on his friend.

He said: “Robbie and I were pretty good pals and Robbie was my best man when I got married to Teri (his first wife).“It wasn’t drawn from life. I have never drawn him, but I wanted to.

“A lot of people say he looks like another friend of mine, Hugh Byars, the artist – but Robbie was the initial inspiration.

“I don’t know if he ever saw it or recognised it.

“He never mentioned it – I didn’t know how we would feel about me putting him in a wheelchair.”

His portrait is one of 150 works of art from the sale, which has moved from Gleneagles – after a 40-year run – to London amid some controversy earlier this year.

His nude painting of Madonna was sold at auction in New York for £26,000 to a private collector.