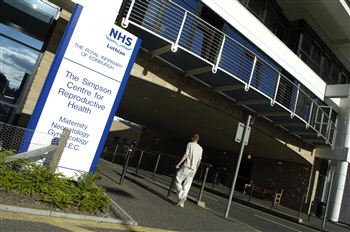 A COUPLE who underwent years of IVF treatment want to know why their dream baby was allowed to die just three days after her birth – claiming mistakes may have been made during delivery.

The couple – who are remaining anonymous – claim they were refused a second opinion and a caesarean section during labour.

They are also claiming that the forceps used to remove the baby girl contributed to her death three days later.

The couple have said that the experience has been “beyond their worst nightmares” and particularly devastating as they conceived baby Alexandra after five years of IVF treatment.

NHS Lothian and the Procurator Fiscal have launched an investigation but have also contested several of the allegations.They have said that the birth was carried out using standard procedure, adding that it was a “terrible tragedy”.

The 32-year-old woman said: “If it was the safest way to deliver our child then why is she dead?

“We have been told by the hospital that staff would do exactly the same procedure again and that we should actually feel sorry for the doctors, as they are really upset.

“It’s not them who have to walk past a room every day that was meant to be their daughter’s.”

The woman was first admitted into Simpson’s Maternity Unit in mid-June, when she was two weeks overdue.

The woman claims she was in labour for 40 hours – something that NHS Lothian contest.

He said: “This is a terrible tragedy for this family and our thoughts remain with them at this very sad time.

“It will be even more traumatic and distressing for the couple because they had planned to have a home birth.

“The tragic death is being investigated by the procurator fiscal as part of the routine procedures for a death in hospital while our own rigorous internal review, which is also standard procedure in such circumstances, is nearing completion.

“We have already told the couple that we are very happy to discuss any questions they may have in person once our investigation is complete.

“I do not believe is appropriate to discuss this deeply sad event through the media.”