Ex-Hibs keeper boozed at the wheel

A HIBS reject who “drowned his sorrows” by drink driving has been fined £1,000 and banned from the roads for four years. 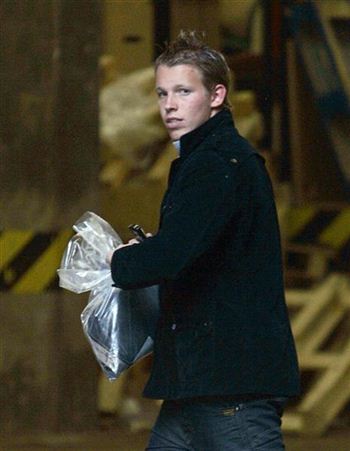 Hungarian goalkeeper David Groff, 20, lost his £30,000 per-year contract with the SPL side earlier this year after failing to make an impact.

He had featured on the fringes of the first team during his three year spell at Easter Road, but was released into unemployment in March.

A few weeks later police found him slumped drunk at the wheel of his Audi A3 in an Asda car park close to the Easter Road stadium where he played in front of thousands of fans.

Police said Groff and a friend were sleeping in the car with the engine running.

Groff, who was in the driver’s seat, was breathalysed and found to have 56 microgrammes of alcohol in his breath, when the limit is 35.

He was released on bail and returned to his native Hungary to try and find a new football club.

But with no luck in his job hunt, he returned to Scotland this week, only to be arrested for the April 12 offence.

He still believes an English club will sign him on a wage better than the one cancelled by Hibs, Edinburgh Sheriff Court heard yesterday (Tues).

Fiscal depute James O’Reilly said: “Police were passing the Asda in Leith’s Sandpiper Drive when they saw Groff sitting in the driver’s seat.

“The engine was running and he appeared to be sleeping. They woke up and noticed a strong smell of alcohol.

“He told them he had been sleeping for an hour.”

Groff’s defence agent David Taylor said he handed himself in after realising he had missed his court appearance on August 12.

He said: “He returned from Hungary immediately and I told him to surrender himself to the police.

“He knows the courts will take a dim view of this and is under no illusion as to where he may end up should this kind of behaviour continue.

“It was a youthful misjudgement.”

He said Groff was currently unemployed and living off savings of £5,000.

Mr Taylor added: “He has returned to Scotland in the hope that interest from a number of clubs in England will crystallise.

“He tells me a number of clubs are willing to offer him a full time contract and hopes to earn as much if not more in England than he was able to earn in Scotland.”

Sheriff Michael O’Grady ordered Groff to pay a £1,000 fine in full within 28 days and disqualified him from driving for four years.

Defence agent Mr Taylor added: “This offence happened not long after he parted ways with Hibernian, so it was, as such, a drowning of sorrows for him.”