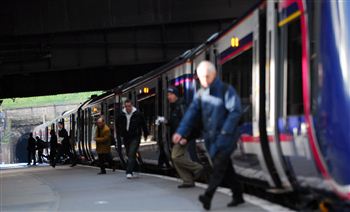 OLD FIRM fans are the worst behaved on the rail network according to new figures from the British transport police.

And Rangers fans are detected for twice the number of football-related crimes than their arch rivals Celtic.

But the Chief Superintendant for the British Transport Police in Scotland Martyn Ripley said it was the nature of the crimes that were worrying rather than the number.

As well as the usual urinating in public and alcohol charges, there were a number of fans arrested for sectarianism.

And last season there were a total of 62 football-related arrests across the rail network, up from 61 in 2007/08.

The Old Firm accounted for a whopping 58 per cent of those crimes last season.

Chief Superintendant Martyn Ripley said: “Some of these incidents have been for breach of the peace, or disorderly behaviour, but we are seeing an increase in sectarian breaches and the resurgence of mob violence.

“For example, we recently had to deal with a large fight that broke out amongst a number of fans in Stonehaven, in Aberdeenshire.

“The level of offence we are recording is now increasing. They are far more serious than a few years ago, to the point where we are starting to see more assaults and violence.”

And he pointed out that the offences don’t just happen in the city that the game is being held in, with some fans travelling through other stations on their way to the match and causing problems there too.

Chief Superintendant Ripley said: “The biggest problem in Edinburgh for example isn’t with the Hibs and Hearts fans; it’s the fans that come to Edinburgh via Waverley Station.

“It’s an interchange point for fans heading down from the north of Scotland, fans coming up from south of the Border, and fans heading west into Glasgow.”