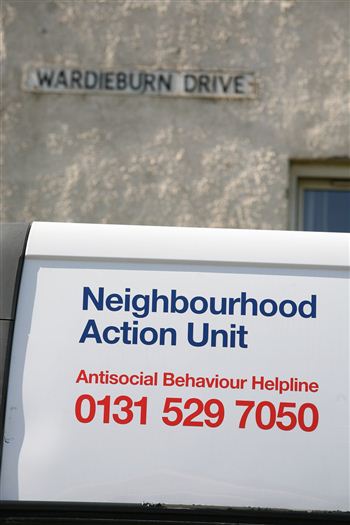 A FAMILY from hell has been booted out of their council home after neighbours were forced to endure a three-year campaign of race hate abuse.

Mum-of-five Sarah Hutton, 36, and her kids were evicted by housing officers after a catalogue of serious complaints were lodged against them.

They stood accused of a string of allegations from harassed neighbours including racially-motivated assault, racist abuse, vandalism and threats to neighbouring families.

One family of ethnic neighbours was forced to flee their home in the Wardieburn area of Edinburgh after allegedly suffering years of terror and racial abuse from the Hutton family.

Officials from Edinburgh City Council and police arrived at the Hutton home on Thursday to execute the power of eviction.

The family was not at the address and after police forced their way into the property a large steel door was put in place.

Many local residents said they were happy to see the family move on, with one claiming her children were too scared to play in the street because of violent attacks.

The resident, who wished to remain anonymous due to fear of reprisals, said: “My kids were often too scared to play outside because her son would attack them.

“I didn’t even like them looking out the window when he was out there because he often threw stones at the windows.

But Hutton, who has lived in the area all her life, hit back at the eviction claiming she was the victim of a smear campaign.

She said: “I am not racist and neither are my kids. One resident – who doesn’t even live here anymore – used to spy on my kids and call the police making all sorts of claims against them, saying they had broken his washing line or thrown stones at his house.

“My head is all over the place because of this and I don’t know what to think.

“The council said they would put me up in homeless accommodation, but I don’t want to do that to my kids, so we’re staying with friends and family.”

She said: “I can’t believe they’ve been thrown out onto the streets. As far as I’m concerned they were nice neighbours.

“The kids could be a bit rowdy at times, but that’s teenagers for you.”

The Hutton family, including mum Sarah, sons Thomas, 19, Michael, 14, and daughters Lauren, 13, Danielle, 10, and Rebecca, eight, had been sent numerous warning letters from the council and had joint visits from council officials and the police before being evicted.

They said the family had subjected neighbours to years of unruly behaviour including a number assaults, extensive vandalism, breaking door entry systems and windows.

Paul Edie, the area’s community safety leader, said: “This action sends a clear message that we will not tolerate any sort of racially motivated harassment. Praise should go to the residents for standing up.

Chief Inspector Denise Mulvaney, from Lothian and Borders Police, said: “Police take the issue of hate crime very seriously, and we believe the robust action taken in this case was the right thing to do.”