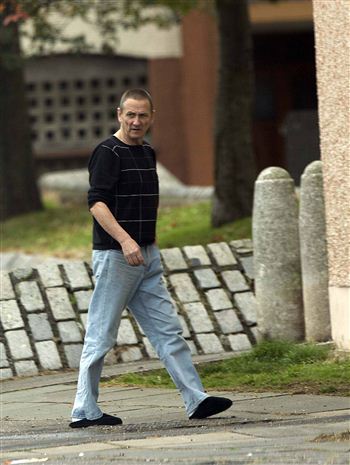 A SEX offender has been rescued by police after a gang of furious vigilante locals descended on his home.

Plain-clothes police in unmarked cars escorted ex-soldier Douglas McNaught from his home in Prestonfield Avenue, Edinburgh, for the second time in a week after being harassed by a baying mob last Thursday.

Last week police took the 61-year-old away after his car was vandalised and he was intimidated by local residents.

He returned only for the same to happen again on Thursday, with neighbours determined to rid their area of the convicted paedophile – who was jailed in 1993 for lewd, indecent and libidinous practices towards a young girl.

It was later found that he had carried out a two-year campaign of abuse against the underage girl.A local source said: “We heard about his history and that he’d recently been kicked out of Wester Hailes.

“Some of the neighbours decided to take action and the police were called to remove McNaught from the house.

“He was brought back to the house by plain-clothes police officers from the sex offenders’ unit a few days later, but on Thursday the neighbours came back and started banging on his windows.

“They must have been monitoring him because as soon as the disturbance started, two plain-clothes police officers stepped out of an unmarked car and identified themselves.

“The neighbours continued shouting and the disturbance got so bad that they had to call for uniformed back-up.

“The neighbours aren’t happy about a sex offender living amongst them.

“Because of what happened on Thursday he’ll definitely not be back in that house.”

McNaught hit the headlines in February this year after it emerged that he had preyed on vulnerable 16-year-old Harry Potter actress Louise Stewart.

After meeting her at a party, he persuaded her to live at his squalid home in Wester Hailes after she had fallen out with her mum and dad.

Her parents alerted the police after they found out that she and other girls as young as 15 had been staying at McNaught’s flat for “sleepovers”.

Following the incident he was warned by cops to stay away from youngsters and in February he was served with a Sexual Offence Prevention Order to stop him contacting young girls.

A spokeswoman for Lothian and Borders police confirmed that McNaught had been re-housed following the incident on Thursday.

She said: “Following concerns for the safety of an individual living in the Prestonfield area, and damage to a vehicle, police assisted in re-housing a member of the public.

“Inquiries are ongoing to trace the person responsible for the vandalism.

“Police do not discuss the security arrangements of any individual.

“Because this man is a registered sex offender, he is protected by law and we are not allowed to discuss his circumstances any further.”