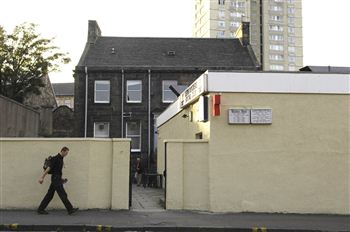 A FURIOUS e-mail rant directed at bosses of a community radio station ended up in the in-boxes of hundreds of stunned listeners – sparking chaos at their Edinburgh based HQ.

Leith FM bosses were accused of overworking volunteers, ignoring alleged death threats from staff and trying to sweep claimed bust-ups between presenters under the carpet in the astonishing message.

And in an attack on station boss John Paul McGroarty, former presenter Dave Woods savaged him, saying: “I’d rather have Charles Manson, Jack the Ripper and Hitler as friends before you”.

Two days later the board at Leith FM was forced to send out a reply message to all the e-mail recipients saying the “malicious message” did not originate from them.

It claimed the board at the radio station were also currently “taking legal advice as well as reporting the matter to the police for investigation.”

The original e-mail from former-volunteer Woods alleged that management had ignored:

– claims of a death threat being issued by a member of staff to a teenage volunteer;
– overworking unpaid volunteers to the detriment of their health;
– ignoring aggressive behaviour between two presenters after one of them accuses the other of being a “crap presenter”;
– and conducting the running of the station like a “boy’s club”.

In his damning e-mail, Woods accuses McGroarty, 41, of being “a liar”, “ineffectual” and “incompetent”.

He also comments: “You have shown favouritism towards certain parties in the station.

“You have protected people who have committed illegal acts, and you have lied and swayed your way through an entire year as acting chair.

“I hope this is clear enough for you. Still want to be friends. I really do hope this clarifies my feelings on this. If not then I have one last thing to say:

“F*** off and don’t bother me again you arrogant self centred (sic) conniving f***wit.”

The worst of the allegations sees Woods accuse the radio station of covering up claims of an incident in July 2008 where a member of staff was alleged to have issued a death threat to a teenage volunteer.

The incident was deemed so serious the youngster’s mother was said to have contacted the station to complain.

Woods also admits to contacting Ofcom regarding the running of the radio station.

He also accuses members of the board of “destroying the valuable asset in the community”.

He wrote: “In effect, you and the Ltd company are now on a pathway to Mutually Assured Destruction.

“I will hold you responsible for anything that happens next regarding the station. It is a valuable asset in the community, and if it is destroyed because of you then I will make this public knowledge. I do not say these things lightly.”

Woods is an occasional presenter on the popular internet radio show Old Jock Radio, and has appeared in various Scottish television programmes.

A respected member of the Leith community, John Paul McGroarty has held the position as Chair at Leith FM for the past three years, and has also been Artistic Director for the Leith Festival since 2003.

Both were unwilling to comment on the matter when contacted.

But a spokesperson for Leith FM confirmedthe e-mail had been circulated – claiming the person they thought responsible was undergoing “psychiatric treatment.”

Their email reply said: “We are deeply concerned and very much regret that you have been troubled in this matter particularly in light of the grossly offensive and abusive content.

“We apologise for any distress or upset this email has caused to you.”

A spokesperson for Lothian and Borders Police said: “We have been informed of an abusive email being sent to the station, but there has been no official complaint.

“We have given the station advice, but there is no police enquiry.

“The incident is being treated as a civil matter.”

Ironically the Edinburgh-based community radio station was first set up in 2007 in an effort to “strengthen the community spirit and the identity of Leith”.